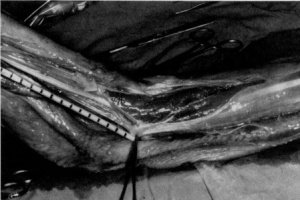 A Ligament of Struthers has been identified and studied in a cadaveric arm. Its relationships to a rudimentary supracondylar process, the pronator teres muscle, the median nerve, and the medial epicondyle of the humerus are described. Compared to an extensively studied series of normals, the ligament in this case was associated with abnormally proximal branching of the median nerve, a finding which is surgically significant and not addressed in the literature to date.[1]

It was highlighted by John Struthers, who discussed the feature's evolutionary significance with Charles Darwin. Its incidence was estimated by Struthers at 1%, but more recently has been estimated at 13.5%. Its clinical significance arises from the fact that the median nerve and brachial artery may pass through the "arch" formed by the process and ligament over the humeral body. 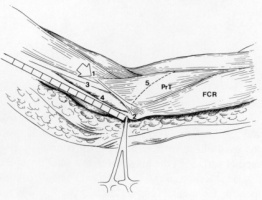 The supracondylar process is an anatomic variant. It is a homologue of a similar bony projection seen in many amphibians, reptiles, and mammals. The ligament of Struthers is thought to be a vestige of the tendon of the latissimo-condyloideus muscle, found in some climbing animals

Supracondylar process syndrome: The median nerve is susceptible to entrapment at the distal humerus in the presence of a fibrosseous tunnel formed by the humerus and the ligament of Struthers.


Very rarely, the median nerve may be compressed at this level resulting in paresthesias and numbness of the affected hand. Weakness and atrophy may occur in long-standing cases. With entrapment of the brachial artery, ischemic pain of the forearm and embolization of the distal arteries may occur. Many patients become symptomatic only after a fracture of the process and will experience local pain with palpation of the distal humerus