Radial Tunnel Syndrome is a syndrome resulting from the compression of the posterior interosseous nerve at the level of the proximal forearm. It does not present with any specific radiological or electrodiagnostic findings. Treatment should be started conservatively; if not successful, surgical treatment is indicated. The posterior interosseous nerve may be surgically explored through a dorsal or an anterior approach. All the potential sites of entrapment should be released, including a complete release of the superficial head of the supinator muscle. Surgical treatment is generally successful, however patients who have associated lateral epicondylitis (also known as tennis elbow),r thpatientsho are involved in workers’ compensation claims have less successful outcomes.[1]

The radial nerve originates from the posterior cord of the brachial plexus to innervate the triceps muscle, extensors of the wrist, and the extensors of the fingers and thumb . The nerve divides in to the superficial and deep branches immediately proximal to the superior border of superficial layer of supinator muscle (the arcade of Frohse). PIN also carries unmyelinated (group IV) afferent fibers from wrist capsule and small myelinated (group IIA) afferent fibers from muscle along its distribution. Group IV unmyelinated fibers from muscles have been associated with nociception and pain which may explain the patient sensory complaints in pure PIN engagement. 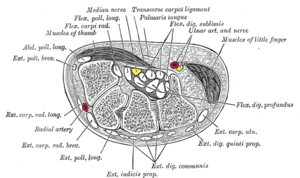 The radial tunnel begins where the deep branch of the radial nerve (DBRN) courses over the radiohumeral (RH) joint. The tunnel ends where the DBRN becomes the PIN as it exits the distal edge of the superficial supinator. Structures within the radial tunnel that can cause compression of the DBRN include, proximally,

Radial nerve compression occurs in throwing and overhead activities. Repetitive pronation and supination can also cause similar symptoms. It is important to examine the cervical spine and the radial nerve both proximal and distal to the elbow. It has been postulated that a proximal compression can make the distal nerve more susceptible to injury. This is known as the double-crush theory.[1]

Intermittent compression of the radial nerve through the radial tunnel is thought to be the pathological basis for radial tunnel syndrome (RTS). The condition is not associated with extensor muscle weakness and due to the fact that the diagnosis is mostly clinical so, the existence of RTS remains controversial. However, those authors who support the diagnosis have identified a number of potential etiologies including compression of the nerve due to the bands of fascia, radial recurrent vessels, edge of supinator and rarely a haemangioma, lipoma, dislocated head of radius, inflamed synovium or accessory muscles.

It is diagnosed with lateral elbow and dorsal forearm pain may radiate to the wrist and dorsum of the fingers. The disease is more prevalent in women with the age of 30 to 50 years old. It occurs by intermittent compression on the radial nerve from the radial head to the inferior border of the supinator muscle, without obvious extensor muscle weakness.

Determining the exact location of the pain in the forearm, is the primary step in evaluating for RTS. The main clinical feature of RTS is a localized tenderness over the radial nerve 5 cm distal to the lateral epicondyle. Patients typically report aggravated pain at nights that may interfere with sleeping. The pain can also become more severe when increased traction is applied to the nerve by extending the elbow, pronating the forearm, or flexing the wrist.[2]

Injury to the nerve can occur due to a multitude of causes at many potential sites along its course. The most common site of involvement is in the proximal forearm affecting the posterior interosseous branch while the main branch of the radial nerve is injured in fractures of the humeral shaft. Signs and symptoms of radial neuropathy depend upon the site of injury. Injury to the nerve distal to innervation of triceps brachii results in loss of extensor function with sparing of function of the triceps resulting in the characteristic wrist drop. Injury in the mid-arm is associated with loss of sensation in the dorsolateral aspect of the hand, the dorsal aspect of the radial three-and-a-half digits and in the first web space. Involvement of only the posterior interosseous nerve (PIN) results in weakness of the wrist and digit extensors.

To diagnosis radial tunnel syndrome, clinical examination is more important than paraclinic tests such as electrodiagnsic test and imaging studies. The exact site of the pain which can more specified by rule of nine test and weakness of the third finger and wrist extension are valuable physical exams to diagnosis. MRI studies my show muscle edema or atrophy along the distribution of the posterior interosseous nerve.

Electromyography (EMG) and nerve conduction velocity (NCV) studies in patients with RTS are typically negative. MRI studies of patients with RTS usually show no pathology but in some cases they may show muscle edema or atrophy along the distribution of the radial and posterior interosseous nerves (finger extensors, supinator and less, pronator muscles) but the validity of the MRI findings is controversial.

Symptoms consist of lateral elbow pain, paresthesias, and weakness of ﬁnger extensors and supinator. The syndrome somewhat resembles tennis elbow. A decrease in grip strength or a subtle fall in performance may be the only presenting symptom. There is tenderness distal to the lateral epicondyle over the supinator muscle. There are sensory defects in the thumb, index, and long fingers. Resisted middle ﬁnger extension with elbow fully extended aggravates the symptoms.

Two accepted clinical tests to confirm the diagnosis include exacerbation of the pain with resisted supination with the other being increased pain in the proximal radial forearm and over the radial tunnel when the wrist is hyperextended against resistance. Studies have concluded the pain elicited with resisted middle finger extension as a pathognomonic sign in diagnosing of RTS. However, other studies noted the pain is rarely induced during resisted extension of the middle finger.

The Rule of Nine is another valuable test in diagnosis of RTS. Developed by Loh et al, the Rule of Nine is utilized when evaluating patients with non-specific elbow and proximal forearm pain. The test is administered by subdividing the anterior, proximal forearm just distal to the elbow crease in to nine circular regions arranged in a 3×3 grid. The grid is about the size of a half dollar. Patients are asked to determine each place as painful, uncomfortable, or nothing when pressure is applied to the individual areas. Three medial pressure circles are the control areas and expected to be free of pain and discomfort. Tenderness on the two proximal circles at the lateral column indicates radial nerve irritation. The posterior interosseous branch of radial nerve lies more distally and between the two heads of supinator muscle. Thus, pressure on the third distal circle would not irritate the radial nerve and it could be used as a control site for RTS in addition to the medial column. In the middle column, the two distal circles overlie the route of median nerve, and pain and tenderness in this area indicates a high level of median nerve irritation.

Pain on the dorsal forearm that worsens at night and arm fatigue are typical presentation of RTS. However these symptoms are not specific to RTS and diagnosing of RTS based on the presentation is difficult. Another confounding factor in diagnosis of RTS is the lack of confirmatory clinical tests. Therefore, RTS is a diagnosis of exclusion and is dependent on clinical signs and symptoms.

The preliminary step in evaluation of RTS requires the exclusion of proximal nerve pathology such as inflammation or trauma of the brachial plexus. Brachial plexus injuries can present as pain in the shoulder and upper limb. In addition, biceps muscle and its tendon may induce elbow pain that can be mistaken for RTS. Tendinopathy is a commonly associated with a rotator cuff tear or shoulder disorders.

Ultrasound, magnetic resonance imaging (MRI), and electromyography can be utilized to rule out other pathologies that can underlie lateral elbow pain. Lateral epicondylitis, PIN syndrome, osteoarthritis of the radioapitellar joint, impingement of the articular branch of the radial nerve, synovitis of the radiocapitellar joint, a muscle tear of the extensor carpi radialis brevis, and posterior plica impingement are diseases that can present with lateral elbow pain.

Motor signs such as digital and thumb extensor motor weakness distinguish PIN syndrome from RTS. Even in complete PIN palsy, the function of the extensor carpi radialis longus muscle and the ability to extend and radially deviate the wrist are preserved. PIN syndrome also does not present with pain, which is the predominant complaint in patients with RTS.

Patients with radial tunnel syndrome and posterior interosseous nerve (PIN) syndrome can present with similar symptoms. Both have been implicated as a cause of resistant lateral elbow pain.

The pain due to the irritation of the superficial branch of the radial nerve can be mimicked by De Quervain’s tenosynovitis syndrome.

After a course of conservative treatment, the rehabilitation program should consist of progressive therapy, which should concentrate on strengthening the involved muscles to maintain balance between agonist and antagonist muscles, stretching, and assessment of sports specific or work-related functional activities. Soft tissue manipulations can prevent adhesions from developing, thus restricting the nerve. Mobility of the nerve is critical in reducing nerve entrapment. Functional activities can be incorporated, including exercises to establish neuromuscular control, proprioceptive neuromuscular facilitation (PNF) diagonal strengthening patterns and closed-kinetic chain activities. Once an athlete regains full range of motions with protective strength, sports-specific drills and plyometrics are begun.[1]

Surgery could diminish pain and symptoms in 67 to 93 percents of patients completely. A patient whose symptoms do not respond to the non-surgical treatment is a good candidate for the surgical decompression. The decompression is performed for the radial nerve and both of its branches: the posterior interosseous nerve (PIN) and the superficial branch of the radial nerve (SBRN). The success rate for decompressing of patients suffering from RTS was estimated between 10 to 95%. Regardless of the surgical approaches, release of the nerve from the arcade of Frohse and ligating the radial recurrent blood vessels is essential. Transbrachioradialis and anterior approaches are the more frequently used approaches used today among the several known approaches to surgical release of the radial nerve.[2]

Although non-surgical treatment shows a reliable outcome, surgical treatment is more promising. PIN release alone showed a 39% to 95% success rate while this amount in release of both PIN and SBRN was equal to 67% to 92%.[2]