Is the presence of a radiological finding of calcification on the medial side of the knee as a consequence of trauma, plus clinical symptomatology of pain and diminished range of motion.[1] This calcium deposit develops between the attachment of the medial collateral ligament and medial condyle.[2][3][4] 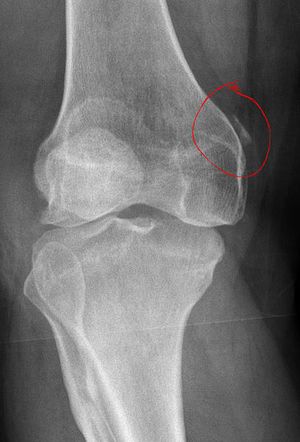 PS lesion might not entail one entity but represent a spectrum of traumatic lesions resulting in an ossification on the medial side of the distal femur.[5] The origin of calcification remains under debate but proposed origins are[6]:

Although the MCL was most often coined as the origin of the lesion (54% overall, 25% on MRI, and 57% during surgery), many cases remained undecided (50% on MRI) or no specific structure was found to be the origin (29% during surgery).[6]

The medial collateral ligament is an important ligament, it has an important role in stabilizing the knee joint. The long fibers of the MCL primarily stabilize the medial side of the knee against valgus and external rotatory stress. The deeper part of this ligament also helps the anterior cruciate ligament in avoiding an anterior translation of the tibia on the femur.[7][8][9]

The Pellegrini-Stieda syndrome is a relatively infrequent phenomenon and is commonly associated with sporting injuries.[5, 6] PSS Is more frequently in the male gender between 25 and 40 years of age.[1]

Direct trauma or in a distant site (skull or spine), repetitive trauma, or after an overstretching injury to the medial collateral ligament and joint capsule can result in an avulsion of the medial femoral condyle or a tear of ligaments, tendons. This injury develop a hematoma or inflammatory edema of soft tissue as a result of tearing and shredding fibers at their femoral attachment [2][10]. The soft tissues degenerate and become affected and subsequent deposition of hydroxyapatite or calcium pyrophosphate produces the calcification in the month following the trauma[1]

Ossification could happen within 11 days to 6 weeks after post trauma. A network of the new bone formation around the periphery of the mass of the medial condyle is formed in 6 to 8 weeks. Duration of the condition is usually about 5 to 6 months.

After a while, the phenomena could occur: the inflammation subsides with partial or complete resorption of the calcium salts, or the mass becomes ossified and may be connected by a pedicle to the femoral condyle. The last is called Pellegrini-Stieda syndrome. [10][11]

Pain and local swelling in the medial aspect of the knee are the two first symptoms following an injury like traumatic synovitis. The pain and disability will increase after a few weeks or months.[1]

The majority of patients are asymptomatic.[1]

When a full range of motion in the knee is attained, and the athlete does not feel any form of pain, he can resume his activities. It is also important that the range of motion is symmetric on both sides. Also, the muscles, Quadriceps, and Hamstrings, have fully recovered. This means full power recovery.[4] 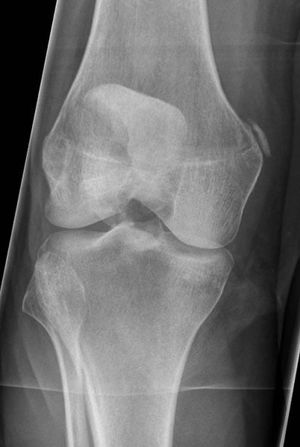 The combination of Pellegrini–Stieda phenomenon/lesion/sign, plus localized pain on medial side of the knee and diminished range of motion is enough to diagnose this Syndrome.[1]

Secondary to the mechanism of injury swelling or hematoma may displace the injured ligament or tendon and subsequently the calcification that can be viewed on conventional  X-ray.[5] It can be observed a linear or curved calcification from the origin the medial collateral ligament and that may extend almost to the insertion. A new classification is proposed based on the location[2][13]:

The treatment of the PSS is usually conservative.[1][2]

The use of Aspirin or non-steroidal anti-inflammatory preparations could be prescribed in the treatment of this condition. And if pain persists is infiltration of a corticosteroid agent to the tender medial collateral ligament attachment useful. [3][14]

If severe movement restriction because of damage of the medial collateral ligament, surgical excision of the calcification and ligament repair have been performed with good outcomes.[1][15] The pain is gone and the knee again has his full range of motion. Their removal in the early stages of the disease is not recommended because of the high risk of relapse.[1]

Measures such as rest, physical therapy, steroids, and lidocaine injections have been successfully used.[1]

First conservative work, with emphasis on avoiding overload and microtrauma, therefore forced rehabilitation or early sports resumption is to be avoided.

Ice therapy is useful, as well as local and general antiinflammatory.[16](level of evidence 5) Even conservative rehabilitation and mobilization of the knee joint are necessary.

The different steps of the functional rehabilitation can be completed, only in a more controlled and slow manner.[16]

Some examples of knee bending exercises are:

To increase the stretch is useful to use a strap around the ankle and pull or pulling with contralateral leg. Knee straightening exercises could be performed in lying or sitting position with a towel roll under the ankle so that the calf clears the table and increase of the stretch can be done. Another option could be knee straightening on stomach, putting the towel roll under the thigh and the feet off the edge of the table[16][12][14][17][18]