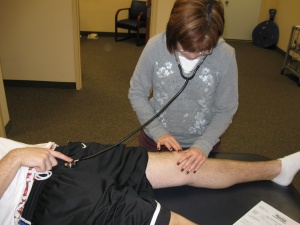 The Patellar-Pubic Percussion Test is a form of Osteophony or auscultatory percussion which is used in the assessment of bone integrity by analyzing its vibrations through the use of a stethoscope and bony prominence percussion.[1]  The patient is positioned in supine and the bell of the stethoscope is placed on the pubic symphysis, held in place by the patient.  The patient's legs are positioned symmetrically and extended while the clinician percusses each patella.  The clinician stabilizes the patella, ensuring that the leg being tested remains in the neutral position.  The clinician compares the sounds from each leg for differences in pitch and loudness.  These sounds should be equal in the case of normal bony structure.  If there is a bony disruption, the affected side will have a duller, more diminished sound when compared to the unaffected side.[2]

In the United States hip fractures have a yearly incidence of about 300,000.  This number is expected to double or possibly triple by the year 2040.  Morbidity and mortality are reported to be as high as 14-36% in the first year after injury.[4][5]  In 2-10% of those patients that present to the ER with a painful hip after trauma, initial radiographs will not show the occult fracture.[6]  Adams and Yarnold[7] reported an interrater agreement of 90.2% for the PPPT.  In a study of 290 patients with post-traumatic hip pain, inablility to ambulate due to pain and negative radiographs, Tiru et al[1] found a sensitivity of .96 and a specificity of .86 for the PPPT in the diagnosis of femoral neck fractures.