The parietal lobes are located near the back and top of the head. They are important for processing and interpreting somatosensory input. Eg. they inform us about objects in our external environment through touch (i.e., physical contact with skin) and about the position and movement of our body parts (proprioception). The parietal lobes are also responsible for integrating sensory input, and construction of a spatial coordinate system to represent the world around us.[1]

The parietal lobe accounts for only 19% of the total neocortical volume (marginally larger than the occipital lobe). The lobe extends from the central sulcus anteriorly, which separates it from the frontal lobe, to the parieto-occipital fissure posteriorly, which separates it from the occipital lobe. The lateral sulcus corresponds to its inferolateral boundary, separating it from the temporal lobe. Medially, it is confined by the medial longitudinal fissure which divides both cerebral hemispheres[2]. 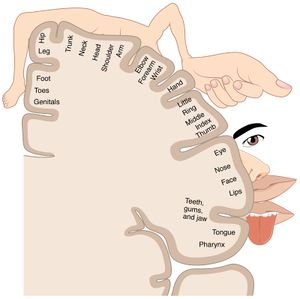 The parietal lobe is vital for sensory perception and integration, including the management of taste, hearing, sight, touch, and smell. It is home to the brain's primary somatic sensory cortex (see image 2), a region where the brain interprets input from other areas of the body. Research suggests that, the more sensory input a region of the body provides, the more surface area of the parietal lobe is dedicated to that area. For example, the fingers and hands are a primary site for sensory data, so much of the parietal lobe is dedicated to receiving and processing their input.

Like all other regions of the brain, the parietal lobe is not fully understood. New studies are consistently making findings about how this brain region works, and it is unlikely that we have identified all of its functions[3].

Image 2: The figure of a human superimposed on pictures of the surface of the brain to represent the sensory regions of the body represented there. 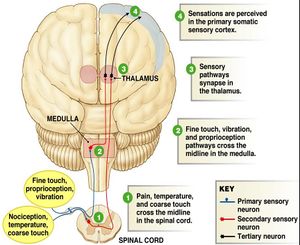 It is a myth that any single brain region controls any function. Rather, each region of the brain works in conjunction with the body. Without the environment, the brain could do little or nothing, and the parietal lobe is no exception[3].