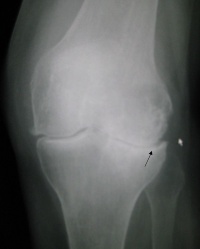 Clinical prediction rules (CPRs) are certain signs and symptoms that can be combined to help clinicians narrow down the likelihood of a specific diagnosis or classification so that appropriate treatment may be directed to facilitate a timely and effective outcome.  Currier et al [1] presented a level IV study in 2007 that favors at least a short term decrease in pain in people that have knee osteoarthritis after they undergone 4 different hip mobilizations.

1. Hip or groin pain or parasthesias

Measuring knee flexion- The patient is in the hooklying position and their knee is flexed up by the therapist to the point where resistance is first met. This is measured with a standard goniometer

Measuring Hip Internal Rotation-The patient is prone with knees flexed to 90 degrees.  A gravity goniometer is then placed over the lateral malleolus and the lower leg is rolled outward

Hip Distraction- The patient is lying in supine. The intended lower extremity is grasped by the examiner above the ankle and put in ~30 degrees of hip flexion and 20 degrees of hip abduction.  A traction force is then applied inferiorly to the point of resistance.

(each mobilization is held 3 times for 30 seconds)

1. Caudal Glides- The patient is supine. The affected hip is flexed past 90 degrees until resistance is felt.  A mobilization belt is place around the patient's proximal thigh and fastened down around the therapist's gluteal region.  The therapist gives a counter force with his hands behind the patient's knees while he sits back into the mobilzation belt, giving the patient a caudally directed force through the hip joint.

2. Anterior-Posterior Glides- The patient is supine.  The affected lower extremity is put into the FADIR position with the foot on the affected side placed on the lateral side of the other knee.  A posterior force through the hip is imparted through the long axis of the femur by the therapist.

3. Posterior-Anterior Glides- The patient is prone.  The affected hip is pulled into extension with the knee flexed with one hand by the therapist. The other hand provides an anterior force through the proximal femur at approximately the gluteal fold.  The amount of hip internal or external rotation can be varied according to the point of most restriction.

An important thing to keep in mind with this particular clinical prediction rule is that the results were seen very short-term. Effect size of almost any intervention will be significant in the short-term..[9]  It is important to keep the results of this Level IV evidence study within that perspective.[1] These 4 hip mobilizations have shown to provide short-term benefit with patients that present with knee pain from osteoarthritis and at least 1 of the above named variables. This is in the first step of a 3 step process that is recommended when formulating a CPR- CPR development.  The next two steps need to be completed to apply this CPR with great confidence. These are: 1. completing a validation study and then 2. completing an impact analysis which would  assess whether clinicians and patients benefit from the CPR.