The International Standards for Neurological Classification of Spinal Cord Injury (ISNCSCI) or more commonly referred to as the ASIA Impairment Scale (AIS), was developed by the American Spinal Injury Association (ASIA) as a universal classification tool for Spinal Cord Injury based on a standardized sensory and motor assessment, with the most recent revised edition published in 2011. The impairment scale involves both a motor and sensory examination to determine the sensory and motor levels for the right and left side, the overall neurological level of the injury and completeness of the injury i.e. whether the injury is complete or incomplete. [1]

Defined as the most caudal, intact dermatome for both pin prick and light touch sensation. 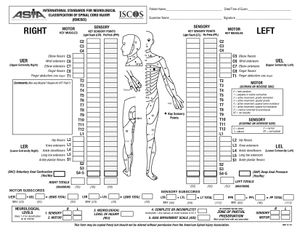 A key point in each of the 28 dermatomes (from C2-S4-5) is tested bilaterally using light touch and pin-prick (sharp-dull discrimination)[1]. Equipment common to clinical settings, such as a cotton wisp and safety pin, may be used. Appreciation of sensation is tested in comparison to sensation on the patient’s cheek. A three-point scale is used for scoring:
0 = absent
1 = altered (impaired or partial appreciation, including hyperesthesia)
2 = normal or intact (similar as on the cheek)
NT = not testable

In complete injuries (AIS A), the zone of partial preservation refers to dermatomes and myotomes caudal to the sensory or motor level that remains partially innervated[1].

The ISNCSCI sensory and motor examinations are reliable when conducted by a trained examiner[4]. Formal training in the administration of the ISNCSCI standards has been shown to improve the accuracy of the examiner’s classification[5].

The ISNCSCI are validated for injury classification[6].

Construct validity of the ASIA motor score as a measure of recovery following SCI and as an outcome measure for clinical trials is greater when upper and lower extremity motor scales are scored independently and not summated together[6].