Insulin pump therapy, also known as continuous subcutaneous insulin infusion (CSII), is one of the most significant advances in diabetes technology in the last 50 years. Although the first commercial insulin pumps were available in the 1970s, rapid adoption of insulin pump technology did not occur until the early 2000s, following the completion of the landmark Diabetes Control and Complications Trial (DCCT) in the early 1990s. The DCCT established the value of intensive insulin therapy in maintaining tight glycemic control and preventing diabetic complications such as retinopathy, neuropathy, nephropathy, and cardiovascular disease. [1]

Pump use carries many pros for individuals with diabetes who are physically active. However, it may come with a few disadvantages.[2] 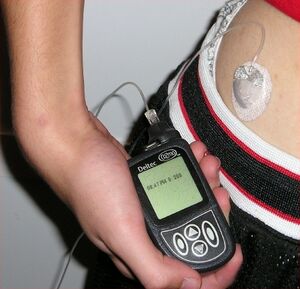 An insulin pump is a small, computerised device that constantly delivers rapid-acting insulin via a small catheter placed into the subcutaneous tissue and adhered to the skin (referred to as an "infusion set" or "infusion cannula"). The infusion set is connected to the pump via plastic tubing in most insulin pumps, and insulin is infused from the pump through the tubing to the infusion set cannula and into the subcutaneous tissue. Some pumps, known as "patch pumps," do not use tubes and instead stick to the skin directly. Patch pumps, which are programmed from a remote device, use wireless technology to deliver insulin through the infusion cannula. Insulin pumps often use insulin formulations that are rapid acting (i.e., insulin lispro, aspart, or glulisine). The FDA has cleared lispro and aspart for use in a pump insulin reservoir for up to 144 hours, but glulisine should be replaced every 48 hours due to the risk of crystallisation. Regular insulin is also FDA-approved for use in pumps and, due to its lower cost, is occasionally used instead of rapid-acting versions. Concentrated insulins (e.g., U200 or U500), dilute insulins (e.g., U50 or U10), and ultra-rapid-acting insulin analogues (e.g., Fiasp) are being researched but have not yet been approved by the FDA for use in pumps.

1) Exercise may contribute to the occurrence of diabetic ketoacidosis (DKA) when there is a disturbance in insulin delivery, which can become fatal in a short period of time.

2) The infusion set may be displaced because of sweating.

3) Ambient temperature, as insulin degrades under extreme conditions of heat or cold.

4) Skin irritation because of the effect of movement at the infusion site.[2]