The clinical phenomenon where using a specific direction of repeated movement or a sustained positions results in an improvement in either symptoms or mechanical presentation. It was originally hypothesized to occur due to a specific movement causing a reductive force on displaced disc material[1], however, this may not always be the case due to people experiencing a directional preference without disc displacement.

It has commonly associated with Mechanical Diagnosis and Therapy (the McKenzie Approach) for the treatment of derangement classifications of the spine. 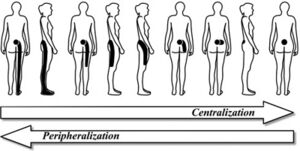