The Rehabilitation Leadership Framework provides a structure for leadership and guidance to help us improve our leadership skills.

What is a High Performance Team?[edit | edit source]

Members of a high performance team will understand the purpose of their work and will trust team members. From this foundation, the team will agree upon goals, roles will be defined and strategies developed.[1]

A team will become empowered when it understands the decision making parameters and goals of an organisation or team. If decision-making practices and accountability are clearly defined, team members can have autonomy and the opportunity to exercise collective and personal power. High performing teams will self manage and be able to work independently towards goals and outcomes.[1] A 2016 study by Jiang and colleagues suggests that the effectiveness of team empowerment depends on the cultural context of the team.[3]

Communication within a team is strongly related to team performance.[4] It is essential that team members feel they can take risks, as well as share their thoughts, opinions and feelings without fear. Differences of opinion are valued in a high performance team. If they create conflict, it is important that this conflict is managed in a respectful manner.[1] It is also important to note that team adaptability has been found to be associated with the ability of team members to communicate effectively about goals and actions.[5]

The high performance team has the ability to adapt to changing conditions. Roles are shared and all members are able to support each other. Strengths of individuals are identified and utilised.[2][1]

A high performance team will always aim to achieve optimal productivity and efficiency. They have high standards and strive to meet deadlines and reach goals. They will also hold each other accountable, but everyone takes pride in the team’s achievements.[1][2]

Everyone, including the leader, recognises each other’s contributions. Because of this, team members feel appreciated/regarded.[1]

Morale refers to the pride that comes from belonging to the team and achieving defined goals. Engagement refers to the emotional connection that team members feel towards others in the group. Members of high performing will feel confident and enthusiastic. They will be optimistic that they can achieve desired outcomes.[2][1]

These attributes discussed above have benefits for all connected to the team, from team members to clients, organisations and team leaders.[1] 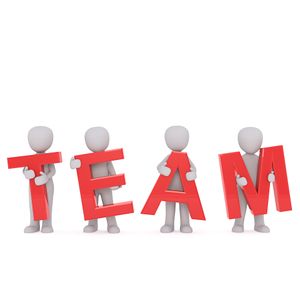 It is important as a leader to be aware of the pitfalls of team development. This allows the leader to be proactive and ensure the team has the ability to become high performing.[1]

Most models of team development focus on developing positive relationships as soon as possible.[6] Trust is essential in a team. The ways in which conflict is managed will have a significant impact on whether or not trust develops in a team. While leaders may be tempted to avoid conflict, productive differences of opinion need to be encouraged. It is important that everyone in the team feels able to share their views or opinions. They should know that every perspective or view is valued and will be respected. Teams are not, however, static - members come and go. This can affect interpersonal dynamics, which can in turn, upset the trust within a team.[1]

Connection can be difficult to achieve, especially for dispersed teams. Because these teams rarely meet in person, they must connect through technology. This almost inevitably results in occasional misunderstandings.[1] Some strategies to address this include:

Team members can sometimes become distracted and lose focus. A team leader must ensure that members have a clear understanding of priorities, especially early on in the team development process.[1]

Changes in team membership, organisational restructuring, funding changes or interpersonal tensions can affect momentum. The leader needs to be able to act to ensure a team is able to reset or refresh in order to keep things moving forward.[1]

A focus on collaborative decision making and collective action adds a degree of complexity to achieve tasks. This can be frustrating for some team members as some individuals prefer that the leader takes unilateral action. However, high performing teams will tend to rely on collective wisdom in the team.[1]

Hierarchical decision making in organisations, as well as power dynamics, conflicting objectives and system barriers all affect a team’s ability to achieve its purpose. This is especially true as team members often have little influence over these factors. The leader needs to be able to identify and remove as many barriers as possible to ensure the team’s success.[1]

Patrick Lencioni: The Five Dysfunctions of a Team[edit | edit source]

In this book, Lencioni discusses the challenges team leaders may face while trying to create a high performance team.[7] These include

Team psychological safety refers to a shared belief that members of a team feel safe about interpersonal risks that may arise from their behaviour in a team context.[8]

A sense of psychological safety in a team will enhance a team’s performance. In fact, it is four times more significant than any other factor in determining performance. Psychological safety ensures that team members will feel happy to ask for, offer or reject help. They will be able to discuss issues, and acknowledge if they do not know something.[1]

If a team member is worried that they will be teased/insulted by other team members, they won’t put forwards ideas or discuss their opinions/values/concerns. This can result in problems remaining hidden and work won’t be optimal.[1]

What can the team leader do to assess whether or not team members feel safe?

There are five key elements that impact on the psychological safety of a team.

The leader’s role evolves through the first four stages:

However, in reality, team development is not quite so straight forward or linear. Usually there are a number of cycles of team development. New members may join when the team is norming and the team will go back to the forming stage. Similarly, if roles are unclear, a team may move from the performing stage back to the norming phase. There may be conflict between subgroups within a team when it is performing - thus, some team members may leave, so the team goes back to the forming phase.  The length of time for each stage will vary depending on the group. Moreover, there is no firm line between each phase. However, each stage is essential in the team development model.[1]

This is a seven stage model of team development. It is divided into two areas: creation (4 stages); and performance/sustainability (3 stages).[11]

All three models of team development reviewed emphasise the importance of having positive relationships within the team, ensuring that there is a sense of trust, that conflict is productive and that there is a unified focus on the intended outcome.[1]

A leader may take on a team in different stages of development. There will be different challenges depending on what stage the team is in.[1]

A start up team is newly formed and has a defined purpose. At this stage, the leader has an opportunity to connect with members and intentionally launch the team.

This has 3 main phases:

Sometimes you may be brought in to take on the leadership of an existing team that is struggling to perform, or an unsteady team that rarely has success, or a dysfunctional team that exhibits disharmony.

Sometimes you may be called upon to lead a team that is performing well. As these teams tend to self manage, it might seem like these teams can be left alone. However, a leader has an opportunity here to help such a group achieve even more. A leader could consider:

Sometimes a team will achieve its goals and no longer be required. In other instances, a team just doesn’t work out. Such teams need to be discontinued. A leader is needed to ensure that this process is well managed. The leader should help celebrate achievements (small or large) and examine any features that may improve performance in other teams down the track. It is necessary that the learners communicate to members and other stakeholders when a team is being disbanded. They can also support team members by ensuring that they are supported when looking for future opportunities.[1]