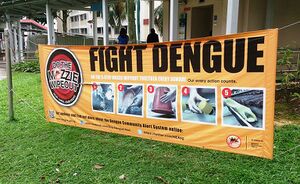 Dengue is a mosquito-borne viral infection, found in tropical and sub-tropical climates worldwide, mostly in urban and semi-urban areas.[1]

Dengue fever is caused by any of four distinct serotypes (DENV 1-4) of single-stranded RNA viruses of the genus Flavivirus.[2] Once infected, people become immune to that specific dengue virus. However, they can still get sick from the other dengue viruses. Being infected by multiple dengue viruses can increase the risk of more severe symptoms, and even death.[3] 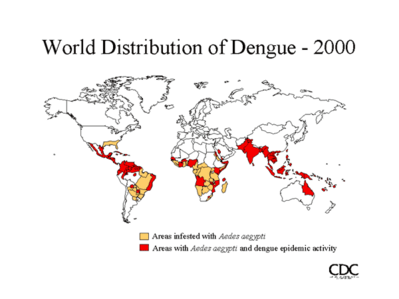 Dengue is the fastest spreading mosquito-borne viral disease in the world, affecting greater than 100 million humans annually. Dengue also causes 20 to 25,000 deaths, primarily in children, and is found in more than 100 countries. Epidemics occur annually in the Americas, Asia, Africa, and Australia[2].

The primary vectors of the disease are female mosquitoes of the species Aedes aegypti and Aedes albopictus. Although A. aegypti is associated with most infections, A. albopictus’ range is expanding.

The global incidence of dengue has grown dramatically in recent decades. About half of the world's population is now at risk. There are an estimated 100-400 million infections each year.[1]

Infections are asymptomatic in up to 75% of infected humans. A spectrum of disease, from self-limiting dengue fever to hemorrhage and shock, may be seen. A fraction of infections (0.5% - 5%) progress to severe dengue. Without proper treatment, fatality rates may exceed 20%. These occur primarily in children. The typical incubation period for the disease is 4 to 7 days, but it can last from 3 to 10 days. Symptoms more than two weeks after exposure are unlikely to be due to dengue fever. [2]

Severe dengue was first recognized in the 1950s during dengue epidemics in the Philippines and Thailand. Today, severe dengue affects most Asian and Latin American countries and has become a leading cause of hospitalization and death among children and adults in these regions.[1] 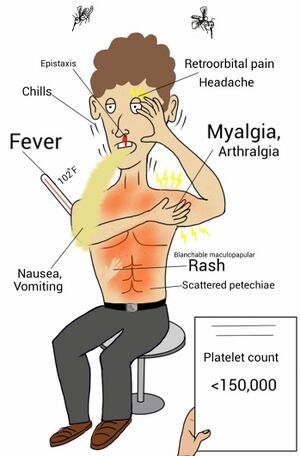 Common signs and symptoms of dengue fever include:

Symptoms can start anywhere from 4 days to 2 weeks after being bitten by an infected mosquito, and typically last for 2 to 7 days.

After the fever eases, other symptoms can get worse and may cause more severe bleeding; gastrointestinal problems like nausea, vomiting, or severe abdominal pain; and respiratory problems. Dehydration, heavy bleeding, and a rapid drop in blood pressure (shock) can follow if severe dengue goes untreated. These symptoms are life-threatening and need immediate medical care[4].

There is no specific treatment for dengue fever.

Fever reducers and pain killers can be taken to control the symptoms of muscle aches and pains, and fever.

For severe dengue, medical care by physicians and nurses experienced with the effects and progression of the disease can save lives, decreasing mortality rates from more than 20% to less than 1%. Maintenance of the patient's body fluid volume is critical to severe dengue care. Patients with dengue should seek medical advice upon the appearance of warning signs[1].

The best protection is to prevent bites by an infected mosquito. measures include: