Respiratory diseases are a major cause of societal, health, and economic burdens worldwide.[1] Therefore, in the last decade, significant research efforts have been dedicated to improving early diagnosis and routine monitoring of patients with respiratory diseases to allow timely interventions. However, addressing these issues has been highly challenging since available respiratory measures such as spirometry are dependent on patient motivation and cooperation, and other tests such as blood gas analysis and imaging are not available in all clinical settings and are expensive.[2][3]

ARSs provide crucial information on respiratory dysfunction,[4] and changes in their characteristics(eg, intensity, duration, timing) might inform the clinical course of respiratory diseases and treatments. [5] [6]Through the use of CORSA, ARSs have been found to be a more sensitive indicator, detecting and characterizing the severity of the respiratory disease before any other measure.[7] Thus, this approach, through objective data collection and management, generation of permanent records of the measurements made with easy retrievability, and graphic representations, assists with the diagnosis and monitoring of respiratory diseases.[8][9][10][11]

Sounds recorded from the respiratory system were captured by microphones or contact sensors situated at the mouth (free field), on the chest or elsewhere. Other physiological signals were commonly captured alongside the sound. For example, airflow, change of lung volume and/or intra-thoracic pressure and oxygen saturation.

Upper airway sounds such as snoring and cough were often captured by microphones used in free field at a set distance from the patient's mouth.[12] Adventitious and breath sounds originating from the lower airways were captured from the chest wall using two types of microphones: 1) electret air-coupled microphones and 2) contact sensors(accelerometers) [13][14] 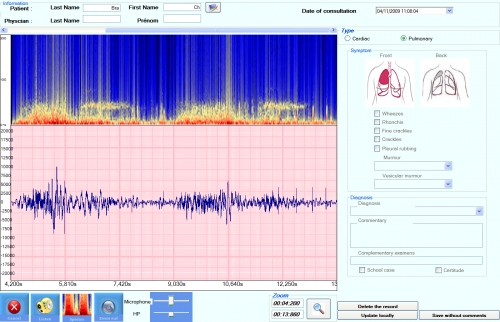 However, that there is a lack of standardization across studies in the methods used for lung sound recording, computer algorithms for signal analysis and statistical methods for outcome analysis.