The Chaddock reflex introduced as the External Malleolar sign in 1911 by Charles Gilbert Chaddock is an alternative to the Babinski reflex[1]. Both reflexes test the integrity of the corticospinal tract(CST). Both reflexes are easy to optain as the don't require major cooperation from the patient.

While the Babinski reflex is more commonly used in a typical neurological exam,an alternative such as the Chaddock reflex can be utilized when the patient shows a significant withdrawal response to plantar stimulation during a Babinski reflex.

Similar to the Babinski reflex ,a dull instrument such as a tongue depressor, or the end of a reflex hammer are used. A sharp tool isn't recommended as it can cause pain or injury.

The patient should be warned that the sensation may become a bit uncomfortable, or that they could feel a tickling sensation, although it is less likely than the Babinski sign which requires plantar stimulation. The examiner should also make sure that the dorsolateral aspect of the foot is well and free of any injuries or lesions.

The reflex is obtained by stimulation of the dorsolateral aspect of the foot from the posterior part of the skin just inferior and anterior to the lateral malleolus and along the lateral edge of the foot. The positive sign similar to Babinski is flexion of the big toe and fanning of the other toes indicating an upper motor neuron lesion specifically the CST. 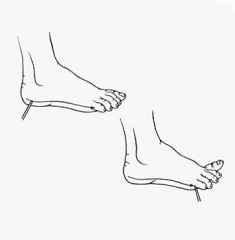