Fahn[1] created the Arm Dystonia Disability Scale (ADDS) to be more sensitive to focal dystonia of the arm. It extends the Fugl-Meyer Assessment (FMA) scale with ordinal grading of motor function difficulties in performing seven specific tasks using the arm, one of which is playing a musical instrument.

See the original Fugl-Meyer Assessment of Motor Recovery after Stroke

People with a genetic predisposition who experience repetitive stress in the form of frequent complex motor tasks and people diagnosed with arm dystonia. See the Dystonia and Dystonia Rating Scale pages for more info.

The Arm Dystonia Impairment Scale (ADDS) is intended to assess disability on a scale of 0 to 100%, with 100% representing no disability. It is computed as follows:

If functional activities are restricted, the next section is completed. Score the difficulty of executing each action in the list below as follows:

0 - None (or not applicable, i.e. patient does not perform the activity)

The subject is made to perform the following tasks and is scored on a scale of 0-3 as listed above.

The final score is reduced by this amount proportional to the maximum possible, i.e.:

"eating" (instead of "handling utensils and feeding") "shaving/teeth brushing" (rather than "hygiene (for example, shaving, cleaning teeth)" ”gardening” (instead of "housework or outside job") 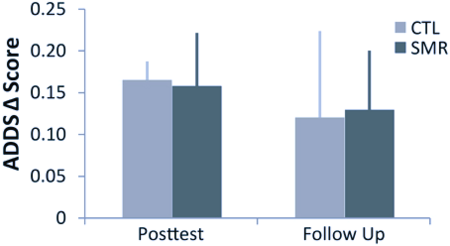 A graph depicting the other scales used in place of the Arm Dystonia Disability Scale (ADDS) by Fahn in the first phase of treatment (CTL in light blue, SMR in dark blue). (SMR, sensorimotor retraining, CTL, control).

In some studies that appear to use the ADDS, the scale is not referred to as such, but rather as one of the following: