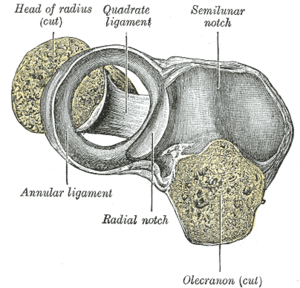 A strenuous pull on the forearm through the hand can cause the radial head to slip through the distal end of the annular ligament. Young children are particularly susceptible to this “pulled-elbow” syndrome because of ligamentous laxity, an unossified radial head, relative reduced strength and slowed reflexes, and the increased likelihood of others forcefully pulling on their arms—such as a parent, or even a pet dog. One of the best ways to prevent this dislocation is to explain to parents how a sharp pull on the child’s hand can cause such a dislocation.

There may be a history of the child being jerked by the arm and subsequently complaining of pain and inability to use the arm. The arm is held more or less immobile with the elbow fully extended and the forearm pronated; any attempt to supinate the forearm is resisted. The diagnosis is essentially clinical, although radiographs are usually obtained to exclude a fracture.

For the majority of cases: