Von Willebrand Disease (VWD) is considered to be the most common bleeding disorder in humans and in some animals such as dogs. VWD is named after the Finnish physician who described the disease in the 1920s. 1 in 100 to 10 000 individuals is estimated to have VWD.  Patients with mild VWD symptoms are rarely diagnosed resulting in the gap “100 to 10 000“[1]. It is estimated that it affects 1% of all US population[2].

In 1926 the Finnish physician Erik Von Willebrand described a new bleeding disorder which he called “hereditary pseudo haemophilia.” He recognized that this new disease is different from haemophilia, but he couldn’t identify the responsible plasma factor. Later by many years; this factor was identified and named after him too and now it’s known as Von Willebrand Factor (VWF)[3].

There are several classifications of VWD (Figure below).  Inherited VWD is further categorized into types 1, 2 and 3 and acquired VWD. The international society of thrombosis and homeostasis further classifies VWD according to qualitative and quantitative VWF defects[12]. 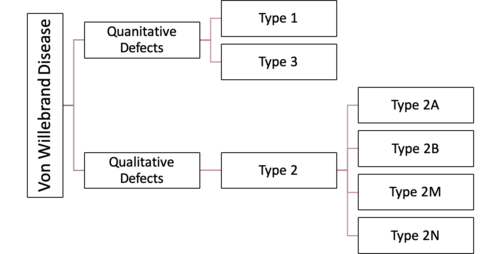 Type 1 VWD is the most common. About 75% of people with VWD are type 1 [14][15]. It is considered to be the mildest type and it has a partial quantitative VWF defect[14]. Due to its mild presentation, it is the hardest to diagnose. Type 1 VWD is autosomal dominant. The most common manifestation of Type 1 VWD is tooth bleeding and bleeding post-operative or post-injury. [14][16] 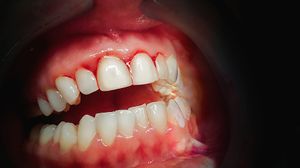 20-25% of people with VWD have type 2, making it the second most common[15]. It is known for its qualitative VWF defect. With Type 2 there is enough VWF factor in the blood. But, the VWF factor does not work properly due to a mutation in the VWF multimer[5][17]. It is subdivided into four subtypes which are Type 2A, Type 2B, Type 2M and Type 2N[4].

Type 2B is the second most common subtype in Type 2. It has a different mutation in the VWF protein from Type 2A. This defect leads to the binding of the VWF to the platelets in the bloodstream instead of binding at the injured site. The body then removes the abnormally bound platelets causing a decrease in the platelets amount[15]. Type 2B manifests by bruising easily, prolonged bleeding from minor wounds and nasal bleeding (epistaxis)[5].

M stands for Multimer. Type 2M is characterized by a mutation in the multimer of the VWF protein leading to decreased activity of VWF and its failure to bind with the platelets. Type 2 M manifests by prolonged bleeding from minor wounds similar to Type 2B[11].

“N “ refers to Normandy or in French Normaundie, a town in France where this subtype was first identified.[15]  It is characterized by a failure of Factor VIII transporting on VMF despite normal platelet binding with VWF. This results in low factor VIII levels. Type 2N is commonly mistaken for haemophilia A due to the low factor VIII levels.[15]

The most severe and rarest type of VMD is type 3 VWD. It is characterized by the complete absence of VWF in the blood plasma and blood platelets. In contrast to type 1 and type 2, type 3 is autosomal recessive. Type 3 VWD manifests as severe bleeding in soft tissues, joints, muscle, nose and gut[14].

The clinical manifestation of VWD is different according to the type of VWD[14].

The most common manifestations include:[18]

Some common manifestations in the pediatric population include :[19]

Von Willebrand disease is the most common bleeding disorder, but it is also the hardest to diagnose.[20] Unfortunately, the usual blood clotting screening laboratory tests such as CBC, Activated Partial Thromboplastin Time (APTT) Test, Prothrombin Time (PT) Test and Fibrinogen test are all normal in patients with VWD especially those with mild and moderate types.[21]

To diagnose VWD there are screening and diagnostic laboratory tests that can be used.[22]

VWF antigen is a quantitative reliable assessment tool of the plasma VWF protein level24. This method is efficient in detecting VWD quantitative defect types. The normal range of VWF: Ag is 50 to 200IU/dl. Anything lower than 50 may indicate the presence of VWD.[23]

The VWF: RCo is the most commonly used test to assess the ability of binding ability of VMF24. The normal ranges of VWF:RCo are between 50 and 200 IU/dL.[23]

The measurement of FVIII: C is included in the screening laboratory tests of VWD. VWF is a carrier protein for FVIII. Normal ranges of FVIII:C/VWF: Ag ratio is approximately 1. In type 2N, this ratio is low, and in type 3 VWD, the FVIII:C is  less than10 IU/dL[23].

Once VWD is diagnosed some confirmatory tests are run to indicate the type of VWD such as[23]:

Treatment of VWD is based on the severity of symptoms and the amount of haemorrhage. As most patients with VWD are type 1 (mild type); they don’t need regular treatment. The goals of treatment are to increase the circulating VWF activity and reduce haemorrhage.[24]

Desmopressin can be administered by nasal spray, intravenous or subcutaneous injection. It that can be administered easily at home and is used for type 1 VWD. The recommended dosage is 0.3 mcg/kg intravenous or subcutaneous or 2 sprays intranasally (for patients above 50 kg) or 1 spray intranasal (for patients less than 50 kg).[25]

Antifibrinolytics such as Aminocaproic acid and Tranexamic acid inhibits fibrinolysis. They are used as active and prophylactic treatments, especially for mucosal surfaces. They are introduced orally or intravenously. The recommended dosage for Aminocaproic acid is 100 mg/kg then 50 mg/kg every 6 hours. The dosage for Tranexamic acid is  1500 mg 3 times daily for  5 days for menorrhagia cases.[24][25]

Hormonal therapy is also an option in treating menorrhagia.[26]

Physical therapy has an important role in promoting functional skills in paediatrics and adults with VWD; that is why the National Haemophilia  Foundation formed a physical therapy working group to create the best physical therapy practice for bleeding disorders such as VWD.[27]

According to the MASAC; the physical therapy evaluation is an important element of VWD management. The evaluation aims to detect musculoskeletal and other limitations caused by the bleeding disorder that affect functional activities and daily life activities(ADL).[28]

It includes interviewing the patient or the caregiver and taking the notes about:

Joints that have recurrent bleeding disorders are known as “Target Joints”. The most common target joints are knee, elbow, ankle, hip and shoulders.[27]

There is a recommended physical therapy program by the MASAC for muscles and joints bleeding in different recovery phases (Acute, Subacute and Chronic). All muscles follow the same guidelines, except for iliopsoas muscle, and all physical therapy suggested protocols are performed post factor replacement medication as follows :[29]