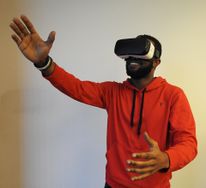 Virtual reality (VR) technology has become increasingly prevalent in many spheres of technology, including healthcare rehabilitation. There is substantial research examining the effects of VR on Parkinson’s.[1] Parkinson's is a neurodegenerative disorder that is traditionally managed by a combination of medication and physical therapy treatment.[1] With VR's increasing popularity, VR has the potential enhance treatment outcomes.

With the advent and recent popularity of VR technology, VR has been proposed as a possible rehabilitation tool in conjunction with traditional physiotherapy approaches. A recent review has illustrated that a sense of control, success, and an appropriate level of challenge are key ingredients that explain a patient’s immersion and enjoyment of VR systems.[2] VR systems optimize motor learning in a safe environment, and can help improve activities of daily living by replicating real-life scenarios.[1]

Within VR, augmented feedback about a person with Parkinson's performance enables repetitive practice of motor tasks, thus stimulating both motor and cognitive processes simultaneously. VR offers patients with neurological deficits, such as Parkinson's, an opportunity to develop new motor strategies, or to relearn motor abilities that were lost due to their injury or disease processes.[3][4][5] For example, a person with Parkinson's and akinesia will have trouble initiating a step, but will be able to step over an object that appears in their path.[6] Using this concept, VR can overlay objects in a patient’s visual field, encouraging the initiation of a step, improving function in these patients.[6] Additionally, other VR technologies focus on improving more broad symptoms of Parkinson's, such as being able to increase stride length and improve balance, in safe, controlled environments. An example of VR used in such a setting can be found here. When compared to traditional physiotherapy, experiments studying the effectiveness of VR in improving gait and balance outcomes, namely the Six-Minute Walk Test and the Berg Balance Scale, have demonstrated that VR based training in people with Parkinson's leads to moderate improvements in step and stride length.[1]

The Nintendo Wii and Xbox Kinect have been used as VR tools in addressing symptoms of Parkinson's. The rationale behind using VR systems lies in providing augmented visual and auditory feedback to gradually challenge postural control and balance during a task. This strategy bypasses the deficient motor generation system present in people with Parkinson's, thus improving their motor response.[7] An area where VR training may be especially effective for addressing symptoms of Parkinson's is fall prevention when there is poor input of visual and somatosensory systems.[8] A possible explanation for this is due to the conditions under which VR training occurs; where the visual and somatosensory systems are being altered and are unreliable, thus forcing the patient to rely on use of their vestibular system for balance.

VR technology holds some limitations for people with Parkinson's. These include the possibility of cognitive overload, cyber-sickness, or an inappropriate level and content of exercises for rehabilitation of Parkinson's.[10]

Additionally, home-based VR systems used for rehabilitation may be detrimental to performance, as patients may use compensatory movements to increase game performance. Patients may begin to prioritize game scores over their quality of movement, thus reducing training effects. Future home-based VR systems designed for neurological rehabilitation should ensure that compensatory movements cannot be used to improve game performance.[1]

It still remains unclear how VR systems may be adjusted to the specific needs of people with Parkinson's. Commercial VR systems for persons with neurological disorders have yet to be developed. Current systems designed for the general healthy population, such as the Xbox Kinect and Nintendo Wii, can hinder the effectiveness of such interventions and the safety for such populations.[1]

However, VR and physiotherapy interventions both have similar overall effects on gait, balance, and quality of life. In a recent 2016 systematic review, it was concluded that there is only low-quality evidence suggesting that VR can serve as a useful alternative to traditional physiotherapy in improving gait and balance in people with Parkinson's.[1]

VR is still a relatively new technology. Few studies have been done, making generalizations to populations outside of the research circumstances difficult. Further research is needed to expand the evidence for the use of VR in people with Parkinson's. Future research should aim to examine the effectiveness of VR interventions in different disease stages of Parkinson's to determine the usefulness of VR-based interventions in the prevention of physical decline during the early stages of Parkinson's, and during the progression of Parkinson's in the middle to late stages.[1] Additionally, it should also focus on providing evidence-based recommendations regarding the frequency, duration, and content of VR interventions for groups with Parkinson's .[1]