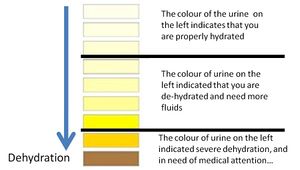 Urine is a liquid waste produced by the kidneys. Urine is a clear, transparent fluid that normally has an amber color. The average amount of urine excreted in 24 hours is between 5 to 8 cups or 40 and 60 ounces. Chemically, urine is mainly a watery solution of salt and substances called urea and uric acid.

The kidneys make urine by filtering wastes and extra water from the blood. The waste is called urea. Your blood carries it to the kidneys. From the kidneys, urine travels down two thin tubes called ureters to the bladder. The bladder stores urine until the person is ready to urinate. It swells into a round shape when it is full and gets smaller when empty. If your urinary system is healthy, the bladder can hold up to 16 ounces (2 cups) of urine comfortably for 2 to 5 hours

Urine is an unstable fluid; it changes composition as soon as it is eliminated through micturition. Accurate collection, storage, and handling are crucial to maintaining the sample’s integrity.

Urinalysis is an ancient diagnostic screening test that has stood the test of time and is still useful in clinical laboratories since it plays a critical role in the health assessment process. For some, a urinalysis is considered as the most common, simple, and relevant screening exam that provides clinicians with valuable information about the general health status of a patient, including hydration, urinary tract infection, diabetes mellitus, and liver or renal disease.[3] 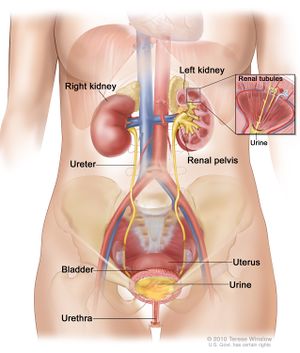 A person may have problems with urination if you have