In unilateral neglect, patients fail to report, respond or orient to meaningful stimuli presented on the affected side [2]. In most cases, the right parietal cortex is injured and the left side of the body and/or space is/are ignored [4].

Unilateral neglect is generally classified in one of two ways: by the modality that is affected or by the space that is affected (i.e. personal or extrapersonal space). It is important to remember that these classifications may overlap and intersect [3].

The incidence rate for unilateral spatial neglect following a stroke in the United States is upwards of 80% in right-sided stroke patients [5]. Right-sided unilateral neglect resulting from left hemisphere damage was found at least to some degree in 43.5% of stroke patients [6]. One’s likelihood of having unilateral neglect following a left hemisphere stroke is substantially increased if there was damage to the posterior association cortex [6]. 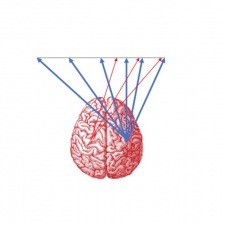 However, lesions in different cortical and subcortical areas may also lead to neglect by causing dysfunction in brain networks [2]. Usually, unilateral neglect results from stroke; however, it may also result from traumatic brain injuries or neoplastic disease. Neglect is most likely in cases of large right hemisphere stroke [4].

Unilateral neglect is a heterogeneous syndrome; the clinical presentation varies largely between individuals. Typically, the syndrome occurs following a lesion of the right parietal cortex of the brain, and the left side of the body or space is neglected. Right-sided neglect may also occur, but usually to a much lesser extent than left-sided neglect [3].

Unilateral neglect can often be seen in a patient’s behaviour even before a conclusive diagnosis, as there will frequently be a distinct lack of awareness displayed by the patient towards their affected side. They may exhibit behaviours such as only shaving half of their face, only eating half of the food on their plate, repeatedly walking into walls, etc. These behaviours should be the cue that initiates an assessment for unilateral neglect . However, it is possible that these symptoms could be attributed to other deficits following a stroke and it is important to rule out possible differential diagnoses, such as vestibular impairment, extinction, hemiplegia, hemianopsia, or somatoparaphrenia . It is important to remember that in a case of unilateral neglect these or other deficits may also be present and that testing for neglect should be done in such a way that these other deficits do not give a false positive or negative.

To this end, there are several tests that specifically evaluate spatial or visual presentations of unilateral neglect. Traditional assessment of neglect uses a pencil and paper model to determine the patient’s awareness and processing ability in a close-up space. Examples of the traditional tests include, but are not limited to, the line bisection, the single letter cancellation, and the behaviour inattention tests.

More recently there has been a shift towards more functional assessment, allowing the evaluator to determine which tasks of daily living the patient may struggle with. Examples of these tests include having the patient navigate an obstacle course or try to walk a straight line. One of the most common pencil and paper tests is the Line Bisection Test. In this test patients draw a line to indicate where they perceive midline to be on a horizontal line [3] [9]. One of the most common functional tests is the Catherine Bergego Scale (CBS). This 10 item checklist is used mostly in the case of patients who have very few additional functional limitations and assesses functional activities such as grooming and eating as well as attentional and motor skills necessary to daily tasks [3].
There are several other tests that can be used to assess and diagnose unilateral neglect; these tests are designed to cover the wide spectrum of presentations and spatial differences that may occur with unilateral neglect [3].

There are two types of rehabilitation interventions used to improve neglect.

The first one aims at improving the patient’s attention to the neglected space; the second one aims at addressing the proprioceptive and kinesthetic deficits [10].

Traditionally, treatment often also includes adapting the environment so that stimuli are constantly presented on the neglected side although there does not seem to be a lot of scientific evidence to support this [1]

Physiotherapy typically involves treating the motor and sensory deficits caused by the stroke, but in stroke patients with neglect, it is important to ensure that the attentional deficits are addressed as well [1].

Visual exploration training can be conducted by training both smooth pursuit and saccadic eye movements. [2]

Patients performed smooth pursuit eye movements by following slow pencil movements performed by a therapist. Saccadic eye movement training can be achieved by using a computer program. In the program used by Schindler et al., patients had to identify whether the square that appeared on their screen was red or green as one task and read the word that appeared on their screen as a second task [2]. A potential benefit from this type of treatment is the acquisition of compensatory strategies [2].

Neck muscle vibration has a proprioceptive effect whereby it creates the illusion that these muscles are being lengthened (i.e. the neck is turning to one side) [3].

Vibration of contralesional posterior neck muscles when combined with visual exploration training results in lasting improvement in neglect symptoms specifically when measured by visual straight ahead, cancellation, tactile exploration, and text reading and also reduces difficulties that a patient may have with activities of daily living (ADL’s) [2].

TMS is a noninvasive method of stimulating the nerve cells in the brain with the use of short magnetic pulses. Repetitive TMS can be used to create significant, long-lasting decreases in unilateral neglect [4].

OKS uses movement on a large visual display to change a patient’s perception of where their body is in space with the assumption that they will try to reorient themselves based on this visual information.

A systematic review by Kerkhoff & Schenk showed that there is a lot of evidence to support that OKS is an effective treatment for neglect [3].

However, the effects of CVS are short-term (sometimes limited to 10-15 minutes), and repetitive CVS is not thought to produce long-term effects due to the adaptation of the vestibular system [3].

GVS is the electrical stimulation of the vestibular system achieved by placing electrodes on a patient’s mastoid processes. Similar to CVS, GVS appears to have a positive, yet short-term effect. More research is needed to determine if repetitive stimulation would have a long-term effect [3].

This treatment requires patients to wear right-shift wedge prism glasses/goggles. With the use of successive perceptual motor pointing tasks, adaptation to the prisms will occur [6]. This adaptation results in a shift of a patient’s perceived straight ahead towards the contralesional side, thereby correcting the ipsilesional shift exhibited by neglect patients.

The evidence suggests that a single session will not result in lasting benefits, but multiple sessions (i.e. >10) could lead to longer-lasting benefits (i.e. 5 weeks). However, the benefits of prism adaptation treatment are not greater than other forms of neglect treatment, neither is the process less time consuming [3].

Limb activation training involves getting the patient to perform active limb movements on the contralesional side of the body in an attempt to bring more attention to that side of the body. This has been shown to significantly reduce visual neglect [6].

Visual and motor imagery exercises can be used in individuals with neglect to improve contralesional space exploration as well as arm sensation and copying/drawing performance on neglect tests [6] [7].

This can be achieved by having patients mentally practice positions and movements of the contralesional upper limb [7].

Sustained attention training increases a patient’s arousal through the presence of external alerting stimuli produced by the therapist and results in significant improvements in cancellation tests [6].

An eye patch over the patient’s ipsilesional eye can improve symptoms of visuospatial neglect [6].

Virtual reality training can be performed through the use of a variety of different programs and has been shown to be more effective than conventional treatment for improving unilateral spatial neglect [8].

Trunk rotation training leads to improved visual exploration on the contralesional side and improved cancellation and line bisection tests [6].

Transcutaneous electrical stimulation of the posterior aspect of the sternocleidomastoid muscle can be used to improve postural control in patients with neglect.

Mirror therapy can be carried out, as was done by Thieme et al. by having the patient place both of their arms on a table with a mirror placed between their arms [1]. They are then required to look in the mirror while moving both arms. The reflecting side of the mirror faces the non-affected arm. Mirror therapy has been shown to have a significant effect on spatial neglect [1].

Feedback training can be achieved through verbal, video, and visual feedback.

Simply pointing out a patient’s neglect behaviour (verbal feedback) or showing them a video of their performance can lead to an increase in self-awareness and a decrease in neglect symptoms [6].

Significant improvements in neglect symptoms were also seen in a study that used rod lifting as a form of visuomotor feedback. The intervention simply consisted of having patients lift and balance rods with a central grip; the rod provides immediate feedback as to whether or not their grip is actually central [2].