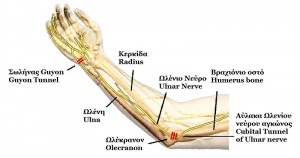 Ulnar nerve entrapment at the elbow (Cubital Tunnel Syndrome) and wrist (Guyon's Canal Syndrome) occur due to repetitive compression, from leaning on the elbows or wrists (cyclist's palsy) and prolonged elbow flexion. It can also occur from trauma, swelling, fractures, and vascular and bony pathologies/abnormalities.

Guyon’s canal syndrome occurs when the ulnar nerve becomes entrapped between the hook of the hamate and the transverse carpal ligament.  Guyon’s canal syndrome is considered an overuse injury which is commonly caused by direct pressure on a handlebar (i.e. bicycle handlebar, weight lifting, construction equipment) and therefore, is sometimes referred to as “handlebar palsy”. It can also result from excessive gripping, twisting, or repeated wrist and hand motions. Also, entrapment may develop if the hand is flexed and ulnar deviated for prolonged periods of time.

The incidence of trauma leading to ulnar nerve compression is unknown; however ulnar neuropathy has been documented after distal humeral fractures and in up to 10% of elbow dislocations, and may also develop from any complex elbow or wrist trauma.[3]

Symptoms of ulnar nerve entrapment include tingling in fingers 4 and 5, weak grip strength, pain and sensitivity on the ulnar side of the forearm, wrist and hand, muscle atrophy, clawing of digits 4 and 5 (sign of benediction).

Cubital Tunnel Syndrome can present in different grades of severity:[6]

Grade I: Mild symptoms including:

Guyon's Canal Syndrome: It is important t rule out other diagnoses which could refer to the elbow. Physical examination includes

In a study conducted by Svernlov and colleagues, three treatments were compared for individuals with cubital tunnel syndrome.[3] All three groups had positive outcomes, with the control group improving just as much as the intervention groups.[3]

According to a case report by Coppieters and colleagues, joint mobilizations of the elbow, thoracic spine and rib thrust manipulations, and ulnar nerve sliding/tension techniques for six sessions were associated with improvements of decreased elbow pain and considerable improvement scores on a neck questionnaire up to a ten month follow-up.[10] The patient reported a history of symptoms for two months prior to starting physical therapy.[10] The protocol used in this study can be seen by accessing the link in the case study section below.

The cervical spine and shoulder regions should be examined to rule out diagnoses that can refer to the elbow.
There are numerous differential diagnoses for ulnar nerve entrapment such as:[5]