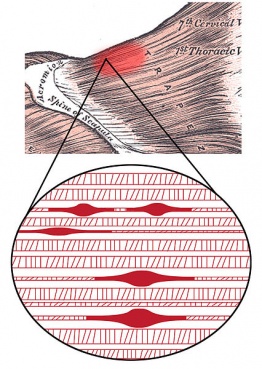 Trigger point in trapezius muscle[24]
A Trigger Point (TrP) is a hyperirritable spot, a palpable nodule in the taut bands of the skeletal muscles' fascia. Direct compression or muscle contraction can elicit jump sign, local tenderness, local twitch response and referred pain which usually responds with a pain pattern distant from the spot[1][2][3][4].

Jump sign is the characteristic behavioural response to pressure on a TrP. Individuals are frequently startled by the intense pain. They wince or cry out with a response seemingly out of proportion to the amount of pressure exerted by the examining fingers. They move involuntarily, jerking the shoulder, head, or some other part of the body not being palpated. A jump sign thus reflects the extreme tenderness of a TrP. This sign has been considered pathognomonic for the presence of TrPs.

Local twitch response - defined as a transient visible or palpable contraction of the muscle and skin as the tense muscle fibers contract when pressure is applied. Coursed by needle penetration or by transverse snapping palpation.

Referred pain, also called reflective pain, is pain perceived at a location other than the site of the painful stimulus. Pain is reproducible and does not follow dermatomes, myotomes, or nerve roots. There is no specific joint swelling or neurological deficits. Pain from a myofascial TrP is a distinct, discrete and constant pattern or map of pain with no gender or racial differences able to reproduce symptoms - referred pain map[5].

(Radiating pain is slightly different from referred pain; for example, the pain related to a myocardial infarction could either be referred or radiating pain from the chest. Referred pain is when the pain is located away from or adjacent to the organ involved; for instance, when a person has pain only in their jaw or left arm, but not in the chest)[1][6].

Trigger points develop in the myofascia, mainly in the center of a muscle belly where the motor endplate enters (primary or central TrPs)[5]. Those are palpable nodules within the tight muscle at the size of 2-10 mm and can demonstrate at different places in any skeletal muscles of the body. We all have TrPs in the body. Can be present even in babies and children, but their presence does not necessarily result in the formation of pain syndrome. When it happens, TrPs are directly associated with myofascial pain syndrome*, somatic dysfunction, psychological disturbance and restricted daily functioning[7].

*Myofascial Pain Syndrome refers to regional pain of soft tissue origin and is associated with muscle tenderness that arises from TrPs, focal points of tenderness, a few millimeters in diameter, found at multiple sites in a muscle and the fascia of muscle tissue[8].

Causes - Usually, TrPs happen due to:

TrPts can be divided into several groups[5]

Little is known about the formation of TrPs. There are some theories written in literature who try to explain the formation, sensitization, and manifestation of TrPs, but few of them have strong evidence[3][10][11].

Under normal conditions, pain from TrPs is mediated by thin myelinated (Ad) fibers and unmyelinated (C) fibers. Various noxious and innocuous events, such as mechanical stimuli or chemical mediators, may excite and sensitize Ad fibers and C fibers and thereby play a role in the development of TrPs.

Polymodal theory explains the existence of polymodal receptors (PMRs) throughout the body which under certain constant, pathological stimuli turn into trigger points[13].

Peripheral and Central Sensitization - Central sensitization is a phenomenon, together with peripheral sensitization, which helps in understanding chronic or amplified pain. There is central sensitization after an intense or repetitive stimulus of the nociceptor present in the periphery, leading to a reversible increase of excitability and of the synaptic efficacy of central nociceptive pathway neurons. Manifested as hypersensitivity to pain (called tactile allodynia and hyperalgesia secondary to puncture or pressure). These CNS changes may be detected by electrophysiological or imaging techniques[15][16].

Other conditions which include muscle pain and trigger points:

No laboratory test or imaging technique has been established for diagnosing TrPs[2].

Anamnesis (a patient's account of their own clinical history) should be specific. The patient must be asked about fibromyalgia, as well as the presence of it in the family history of diseases. Also, the patient should be asked about his physical and daily activities in the presence and in the past as a lack of exercise and sedentary life may be a pathogenic factor. Furthermore, (chronic) muscle overuse, daily stress, medications (and its overuse), sleep disturbances have to be asked and examined in details.

Firstly, the exact location and right TrP should be palpated. What we look for are nodules (small or big ones) or lumps (one or several of them next to each other) in the muscles/fascias, with sometimes a temperature change in the zone of active TrPs ( skin warmer or cooler). Other signs to check up to be sure we are at the proper spot are:

Fischer has proposed the use of a pressure threshold meter (algometer), as a means of quantitative documentation of TrPs, and for quantifying the effects of the physical therapy treatment. Pressure pain threshold and visual analogue scale (VAS) scores were the outcome measures more used in the analyzed trials. ROM also may be an outcome measurement for evaluating therapy[18].

Milder forms of pain may be relieved by over-the-counter medications such as Tylenol (acetaminophen) or nonsteroidal anti-inflammatory drugs (NSAIDs) such as aspirin, ibuprofen, and naproxen. Both acetaminophen and NSAIDs relieve pain caused by muscle aches and stiffness, and additionally, NSAIDs reduce inflammation (swelling and irritation). If over-the-counter drugs do not provide relief, a doctor may prescribe muscle relaxants, anti-anxiety drugs (Valium), antidepressants (Cymbalta), NSAIDs such as Celebrex, or a short course of stronger painkillers (codeine), hydrocodone and acetaminophen (Vicodin)[19].

This is a procedure of inserting a small needle into the patient's active TrP. The injection contains a local anesthetic or saline and may include a corticosteroid. With the injection, the TrP is made inactive and the pain is alleviated. Often, a brief course of treatment will result in sustained relief. Injections are performed by a physician and usually take a few minutes. Several sites may be injected in one visit. If a patient has an allergy to a certain drug, a dry-needle technique (involving no medications) can be used[20].

These are other possible therapies written in literature. Note: not all of theme have strong scientifical evidence. A lot of the researches are not placebo-controlled and immediate effects after treatment may occur due to placebo-effects[18]: