The triceps brachii is a large, thick muscle on the dorsal part of the upper arm. It often appears as the shape of a horseshoe on the posterior aspect of the arm. The main function of the triceps is the extension of the elbow joint.[1]

The Triceps brachii gets its name with tri referring to "three" muscle heads or points of origin (with Brachii referring to the arm). These include the: Medial head; Lateral head; Long head

The 3 minute video is on the anatomy of Triceps [2] 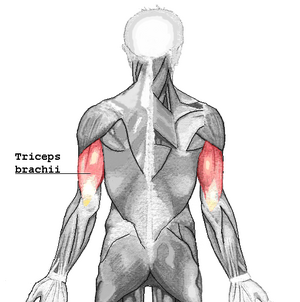 The muscle is supplied with oxygen and nutrients from the branches of the deep brachial artery.[6]

The triceps reflex, elicited by sharply striking the triceps tendon, is often used to test the function of the nerves of the arm. This reflex tests spinal nerves C6 and C7, predominately C7. The reflex is tested by abducting the patient's shoulder and elbow to 90 degrees. Then the triceps tendon is tapped using a reflex hammer just proximal to the olecranon.

Axillary nerve damage can have an impact on the long head of the triceps brachii (LTB). Therefore, people with axillary nerve damage should undergo an assessment for the function of the LTB. If they demonstrate lost function, this shows a poor prognosis, and early repair at three months is recommended.

The triceps muscle can undergo reinnervation through a distal nerve transfer. Commonly used nerves for reinnervation include the flexor carpi ulnaris fascicle of the ulnar nerve and the posterior branch of the axillary nerve. Both of these nerves have been shown to recover the function of the triceps muscle.

Ruptures of the triceps muscle are rare and typically only occur in anabolic steroid users. Distal triceps ruptures are also relatively uncommon. The injury typically occurs due to either a fall on an outstretched hand or a direct blow to the triceps tendon. The patient presents after a painful popping sensation with pain and swelling over the posterior elbow with the inability to extend the elbow against resistance. 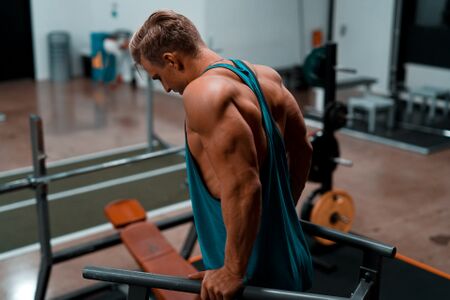 Strengthening exercises: The triceps brachii can undergo training in a variety of different ways. It can be worked out in isolation or with compound elbow extension movements. It can also be contracted statically to keep the arm straight against resistance.

Watch these short videos below for more ideas