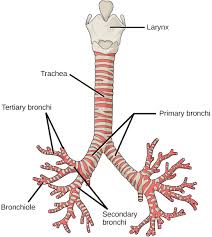 The Trachea or windpipe is a membranous tube about 12cm long attached to the larynx and lying anterior to the oesophagus. It is supported by 12 to 20 C-shaped rings of hyaline cartilage. The cartilage rings reinforce the trachea and prevent it from collapsing during inhalation. The posterior wall of the trachea has no cartilage and contains an elastic ligamentous membrane with bundles of smooth muscles called the trachealis muscle.

Contraction of the smooth muscle can narrow the diameter of the trachea. During coughing, this action causes air to move more rapidly through the trachea which helps to expel mucus and foreign objects.

The trachea divides into the right and left primary bronchi at the inferior end, each of which extends to a lung. The inferior tracheal cartilage forms a ridge called the carina. The carina is an important radiological landmark and it is very sensitive to mechanical stimulation. Materials reaching the carina stimulates a powerful a powerful cough reflex[1]. 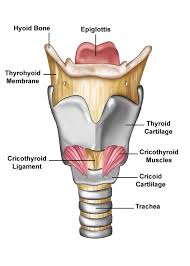 The larynx is located in the anterior part of the throat and extends from the base of the tongue to the trachea. It plays an essential role in all upper airway functions, including respiration, phonation, cough reflex, swallowing, and vomiting.

The larynx is connected by membranes and muscles superiorly to the hyoid bone and consist of nine cartilages connected to one another by muscles and ligaments. The first three of the cartilages which are the thyroid, cricoid and epiglottis are unpaired while the rest are paired.

The epiglottis is the most superior cartilage. The superior opening of the larynx is the glottis and it is guarded by the epiglottis to help keep materials out from the respiratory tract during swallowing. The glottis is also closed to help in holding the breath against pressure in the thoracic cavity, when straining to lift a heavy weight or to defecate[2][4]. The epiglottis is made up of elastic cartilage and is attached to the thyroid cartilage and projects superiorly towards the tongue.

Functions of the larynx[edit | edit source]

The internal laryngeal nerve runs beneath the mucosa of the piriform fossa. In this position it can easily be blocked by the topical application of local anaesthetic to provide anaesthesia for laryngoscopy and bronchoscopy.

Injury to the recurrent nerve can occur in thyroidectomy[2].

Respiratory obstruction after thyroidectomy can also result from direct trauma to the tracheal cartilages[2][3].

Laryngectomy is the removal of the larynx and separation of the airway from the mouth, nose and oesophagus. In a total laryngectomy, the entire larynx is removed (including the vocal folds, hyoid bone, epiglottis, thyroid and cricoid cartilage and a few tracheal cartilage rings). The physiotherapist plays a major role in chest clearance, care of the stoma site and providing education on life following a laryngectomy.