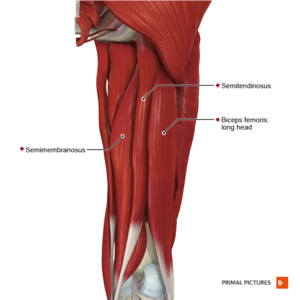 Muscles of the thigh posterior compartment

The hip extensors strength is a primary predictor of walking ability, physical performance and balance in the elderly.[1]

The traditional manual muscle test of hip extensors requires the patient to lie prone to include the gravity as a grading factor. In the elderly population the prone position can be hard to accomplish due to pain, contractures, and reduced mobility.[1]

The Supine Hip Extensor muscle test can be used for the assessment of the hip extensors muscles strength in the elderly, as it is often overlooked. due to the patient’s inability to lie in a prone position and limited hip mobility.[1]

The patient is in supine lying position, the examiner stand at the foot of the examination table and places both hands under the heel of one leg.

The patient is instructed to press the test limb into the mat, keeping the hip “locked” and not allowing it to flex. The examiner liftes the limb at least 90cm.

The study conducted by Jacquelin Perry et al, found The supine MMT is a reliable and valid method with which to assess hip extension strength.

Also, there were similar grading in the hip extensor Manual Muscle Test from supine and prone.[1]