What is Stress?[edit | edit source] 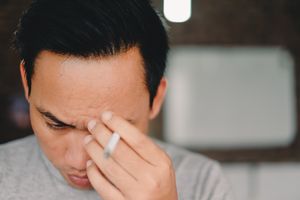 There is no universal definition of stress. Jackson defined stress as the disruption of the body’s homeostasis or a state of disharmony in response to a real or perceived threat or challenge.[1] Whereas McEwen simply states that “Stress is a word used to describe experiences that are challenging emotionally and physiologically.” Stress may be defined as a state of threatened homeostasis, which is counteracted by adaptive processes involving affective, physiological, biochemical, and cognitive–behavioral responses in an attempt to regain homeostasis.[2]

The threatening or challenging situation is referred to as a “stressor.”These stressors may be[1][2]

Stress becomes a problem when too much is experienced, and it has a negative impact on behaviors, relationships, and health. The term “eustress” refers to positive stress that is associated with improved performance and productivity. “Distress” is negative stress that is associated with performance decrement and negative health consequences. The individual’s perception of the stressor and coping resources determine whether a situation is a eustress or distress.

When a person encounters a stressor, the body prepares to respond to the challenge or threat. The autonomic nervous and endocrine systems respond by producing the hormones epinephrine, norepinephrine, and cortisol. The result of this hormone production is a cascade of physiological reactions that make up the stress response. These changes make up the fight-or-flight response, production of β-endorphin (the body’s natural pain killer), and increased acuity of the senses which prepares the body to cope with the stressor. If the stressor is perceived as negative or more as a threat than as a challenge, cortisol production is increased. Cortisol is involved in energy production but also suppresses immune function. General stress response pattern vary according to the characteristics of the stressor i.e familiarity of stressor and level of perceived control one has over the stressor.

Some of the common signs and symptoms of stress are[1][3]:

Effect of Stress on the body[3][edit | edit source]

Muscle tension occurs when body is stressed. Muscle tension is almost a reflex reaction to stress — the body's way of guarding against injury and pain. When muscles are taut and tense for long periods of time, this may trigger chronic myofascial pain. Tension-type headache and migraine headache are associated with chronic muscle tension in the area of the shoulders, neck and head whereas musculoskeletal pain in low back and upper back are also linked to stress, especially job stress.

During the period of stress, the sympathetic responses are triggered causing constriction of the respiratory tract. This can exacerbate breathing problems for people with pre-existing respiratory diseases such as asthma and chronic obstructive pulmonary disease. Some studies have shown to lead panic attacks and asthma attacks after the death of loved ones.

Due to the increase in the level of stress hormones and sympathetic hormones during stress, an increase in heart rate and stronger contractions of the heart muscle occurs elevating the blood pressure. Repeated acute stress and persistent chronic stress may lead to the consistent and ongoing increase in heart rate which in long-term can contributes to inflammation in the circulatory system, particularly in coronary arteries. Thus it can increase the risk for hypertension, myocardial infarction, coronary artery diseases or stroke.

A level of estrogen in pre-menopausal women appears to help blood vessels respond better during stress. Postmenopausal women lose this level of protection due to loss of estrogen, therefore putting them at greater risk for the effects of stress on heart disease.

When a person perceives a situation to be challenging, threatening or uncontrollable, the brain initiates a cascade of events involving the hypothalamic-pituitary-adrenal (HPA) axis, which is the primary driver of the endocrine stress response. This ultimately results in an increase in the production of steroid hormones called glucocorticoids, which include cortisol ( a stress hormone). During a stressful event, an increase in cortisol can provide the energy required to deal with a prolonged or extreme challenge by mobilizing glucose and fatty acids from the liver.

Glucocorticoids, including cortisol, are important for regulating the immune system and reducing inflammation. Chronic stress can result in impaired communication between the immune system and the HPA axis which are linked with chronic fatigue, metabolic disorders (e.g., diabetes, obesity), depression and immune disorders.

Stress can affect this brain-gut communication and may trigger pain, bloating and other gut discomforts to be felt more easily. The gut’s nerves and bacteria strongly influence the brain and vice versa. Stress can lead to changes in the type of diet intake. For instance alcohol, smoking, junk foods causing heartburn and acid reflux. Stress also may make swallowing foods difficult or increase the amount of air that is swallowed, which increases burping, gassiness and bloating.  Stress can affect how quickly food moves through the body which can cause either diarrhoea or constipation. This may lead to a change in gut nerves being more sensitive, changes in gut microbios, changes in how quickly food moves through the gut, and/or changes in gut immune responses causing irritable bowel syndrome.

Due to the increased level of cortisol which helps in the blood pressure regulation of the body including male reproduction system. Excess amounts of cortisol can affect the normal biochemical functioning of the male reproductive system. chronic stress can lead to decrease sexual desire, due to the decrease in immune level can be more prone to infections and also negatively impact sperm production and maturation causing difficulties in couples who are trying to conceive.

Some of the effective strategies for reducing stress responses include:[3][6]

Effects of Exercise on Stress Management