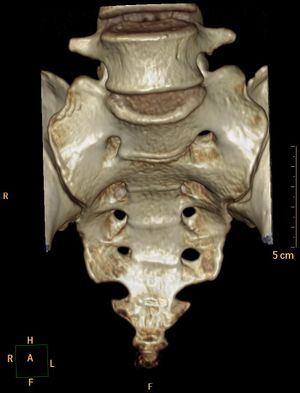 The standing flexion test is a test that can be used to assess sacroiliac joint dysfunction. It is best used in combination with other specific tests. A synonym is the Vorlauf test.

This test involves the sacroiliac joint (SIJ). It is the joint between the iliac bones of the pelvis and the sacrum (figure 1), a joint in which very little movement occurs (nutation and contranutation). It is a strong synovial joint, with both hyaline (on the sacral surface) and fibrous cartilage (on the ilial surface). Furthermore, the SIJ is reinforced by many ligaments connecting sacrum and ilium, and which tend to relax in pregnancy. “The sacroiliac joint has been implicated as a possible cause of low back pain by many authors (Grieve 1976; Erhard & Bowling 1977; Weismantel 1978; Mitchell et al. 1979; DonTigny 1985; Bernard & Kirkaldy 1987; Bourdillon et al. 1995; Schwarzer et al. 1995; Shaw 1992, Maigne et al. 1996).”[1] Some authors claim it to be a major cause of low back pain, others rather think it is an uncommon source of low back pain.[1] Therefore, the SIJ is often evaluated by clinicians who examine patients with lumbosacral pain. Assessing SIJ dysfunction is important.[1][2]

The purpose of the standing flexion test is to assess sacroiliac joint dysfunction. This condition can result from a variety of causes, including osteoarthritis, gout, rheumatoid arthritis, pregnancy, ankylosing spondylitis, … It is a state of altered mobility within the sacroiliac joint’s range of motion, causing changes in the structural relationship between the sacrum, the ilium and one or both legs. It is characterized by:

Because similar findings may occur in case of contralateral hamstrings tightness, this condition should be examined too to rule out any effect of tightness. [1][2][6]