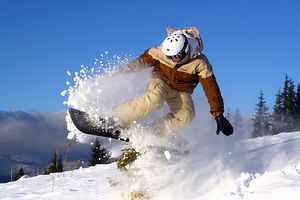 In recent times snowboarding has increased in popularity dramatically, with this increase in popularity comes an increase in a distinct ankle injury which has been aptly termed ‘snowboarder’s ankle’. Snowboarding is a popular winter sport that includes riding a single board down a ski slope or on a half-pipe snow ramp. Snowboarder's Ankle is the common term for a fracture of the lateral process of the Talus (LPTF), often overlooked initially and misdiagnosed as a severe ankle sprain.[1] The term snowboarder’s ankle comes from this fracture being 15x more likely amongst snowboarding associated ankle injuries than any other ankle injuries. Ankles are involved in 12-17% of snowboarding-related injuries.[2] A fracture to the lateral process of the talus in snowboarders can account for one-third of ankle fractures in this population. Various types of snowboard equipment, rider stance, and snowboarding activity tend to result in several types of injury. Soft boots give the snowboarder nearly twice the risk of ankle injury compared with hard boots.[3] Sideways motion, soft (non-hard shell) boots, and being strapped to the board are all factors that influence the higher rate.[4] 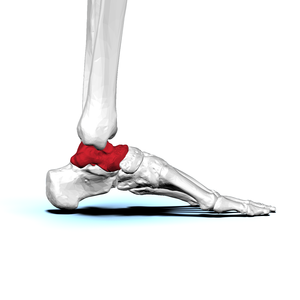 The mechanism of injury is likely that the injured ankle was the leading foot at the time of the fall. Recent research indicates that forced ankle joint dorsiflexion, eversion, and external rotation of the tibia causes the lateral process of talus (LPT) to shear away as it compresses against the calcaneus.[7] Dorsiflexion causes the Talus to become locked in place by the surrounding bones, the ankle roll outwards then causes that specific small area (LPT) to be compressed in between the calcaneus and the lateral malleolus of the fibula with sufficient force applied, the Talus will fracture, causing snowboarder’s ankle.  It can occur during a landing from an aerial maneuver or a jump, especially when the landing has been over-rotated.[8][4]

The cause of the prevalence of the fracture of the Talus bone in snowboarders continues to be debated. In all likelihood, the probable cause is the convergence of both the biomechanics and equipment required for the sport. There is the unnatural sideways biomechanical motion of snowboarding. This is coupled with boots that are strapped to the board, which offer no prompt release upon falling. And then there are the boots which are different from the rigid boots worn in downhill skiing. Snowboarders’ boots are softer and suppler, providing for those thrilling jumps and amazing acrobatics. The more flexible construction of snowboarding boots also indicates that they are less protective on those hard landings from high up causing higher rates of foot and ankle injuries, including snowboarder’s ankle. Whenever there is sufficient force to break a bone, there is possible damage to ligaments and tendons as well.[9]

According to Hawkins classification,

Boack described a modified classification system that can be used to diagnose a fracture of the lateral process of the tibia. This classification covers four types of fracture, each type subdivided depending on the severity of the bony injury, degree of the Chondral lesion, and ligamentous stability. Based on their description, lateral process fractures are divided into four types.

Type 2: An intermediate fragment (0.5-1.0 cm) with some form of displacement:

Type 3: A large fracture fragment (> 1 cm) with associated damage to  the ankle as well as the subtalar joints:

Type 4: A severe form of fracture of either of the processes along with associated instability or dislocation of the subtalar joint.[11]

A snowboarder’s ankle has a similar presentation to that of a badly sprained ankle which is why it is important to monitor symptoms if an ankle injury occurs on the slopes. A history of an ankle sprain while snowboarding when the foot and ankle are fixed in stiff boots and strapped to the board whilst twisting the ankles to change direction should certainly arouse suspicion. A huge 33-41% of these injuries are reported to be missed on initial inspection and just diagnosed as a bad sprain as X-rays in this area are often hard to distinguish. [13]

Symptoms of this injury may include:

The warning signs for a snowboarder's ankle injury involves inflammation and chronic pain. Those who sprained their ankles many times before and complain about persistent pain and swelling are also possible candidates for this specific type of ankle injury.[13]

It may be possible to identify the fracture on plain X-rays, but the fracture line is often quite subtle and difficult to see due to overlapping bony structures.[14] Both lateral (ankle at 90°) and ankle mortice views are recommended for a routine investigation. Ultrasound can be useful for the detection of cortical disruption and ankle joint space effusion; However, follow-up CT or MRI is often used to visualize the fracture line more clearly and provide information to thoroughly understand the extent of the injury. A CT scan should be considered when these symptoms occur for a long period of time because the scan will provide accurate detail if there is a suspected fracture.[15] The sequelae of missed fractures result in malunion, nonunion, long-term disability, and degenerative arthritis of the subtalar joint.[15][10]

Recognizing this injury as early as possible can help reduce the likelihood of subsequent ankle joint degeneration and resulting functional disability. Appropriate intervention depends on the size, location, and displacement of the fragment, the degree of articular cartilage damage, and instability of the subtalar joint. [16]

If the fracture is non-displaced (< 2 mm)  then 6 weeks of non-weight bearing on crutches and a Removable plastic cast or boot is the usual treatment. In the early stages of treatment, ice packs and pain-relieving medications can be helpful in controlling pain and reducing swelling.[11]

Fixation of the lateral process fracture

However, If the displacement is > 2mm, an open reduction and internal fixation (ORIF) may be performed. This involves an incision on the lateral aspect of the ankle, through which lag screws or wires are used to stabilize the bone fragment to the talus body. If there are any loose bodies found during the surgery, these are also removed. In instances of an associated subtalar dislocation, up to 50% of athletes can have an additional osteochondral injury. In these cases, emergency administration is recommended to relocate the subtalar joint, and arthroscopic assessment should be used to visualize the articular surface and to excise any loose fragments, preventing subsequent problems. The treatment strategy based on Boack’s classification is compiled in Table 1.

Table 1: The Management strategy for the Fracture of the lateral process of the talus.[17]

The aim of treatment in these cases is to minimize swelling, inflammation, and pain, and to provide the best conditions for healing to take place. Once the bones are healed, exercise and physiotherapy can be started to aid in the gradual restoration of motion, strength, and function of the ankle joint. Hydrotherapy exercises are very helpful in regaining the ankle range of movement. Manual therapy is important and can help to restore normal ankle movement. Non-weight bearing exercises, pool running using a Buoyancy Belt, also allow the patient to regain fitness.[18] It is also important to introduce a balance and strength program for the lower limb. Intensive rehabilitation reduces the recurrence of future injury. The final stage is getting fitness back and protecting from further injury.  This can be done by using an ankle brace during the sport. There is also some evidence to suggest that hybrid or mid-stiffness boots are the safest forms of boots for protecting the ankles.[19]

Complications that are particular to surgery for a lateral talus process comprise:

Typically, recovery time from surgery needs six to eight weeks of relative immobilization and non-weight bearing, if the fracture has been stabilized (fixed with screws). If the fracture fragments were just cleaned out (debridement), then weight bearing can be started once the patient feels comfortable. Most athletes are able to go back to normal physical activity within 4 to 6 months. However, if missed or improperly treated the outcome is poor, with complications including chronic pain, joint instability, arthritis, or loss of mobility. In general, 80% of people with this fracture make a return to pre-injury levels in their sport. [9]