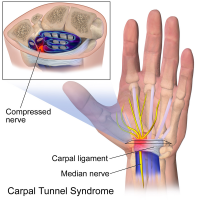 The 'Scratch Collapse Test' (SCT) has emerged as a new provocative test to assist in the localisation of peripheral nerve compression.[1] The SCT is a diagnostic test for carpal tunnel syndrome and cubital tunnel syndrome.

Step 2. Ask the patient to flex the bilateral elbow 90 degree, then examiner applies internal rotation force over the distal arm while asking patient to resist.

Step 3. While in above position examiner applies scratch over the nerve compression area on affected elbow, then immediately repeat above step 2 (examiner applies internal rotation force over the distal arm while asking patient to resist.)

Step 4. Positive test indicates temporary loss of resistance to force applied by the examiner on the affected side.