The scapholunate ligament (SLL) is one of the two proximal interosseous carpal ligaments of the wrist. The other being the lunotriquetral interosseous ligament.[1][2]

These ligaments cover the dorsal, proximal and palmar aspects of their respective joints. The distal aspect of each joint articulates with the midcarpal joint. 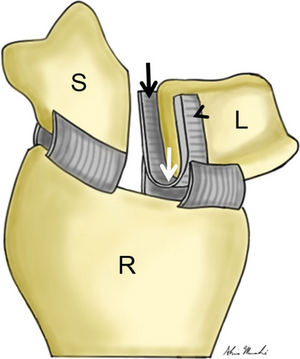 Illustration of scapholunate interosseous ligament anatomy. The drawing depicts a slightly oblique, coronal view of the distal radius (R), scaphoid (S) and lunate (L). The scapholunate ligament has been transected to demonstrate its three distinct parts, which include the dorsal region (arrowhead), palmer region (white arrow) and proximal region (black arrow) components. Note that the dorsal component is the thickest.

SLL is a C shaped ligament that binds the scaphoid bone to the lunate bone of the wrist. The SLL inserts to the most proximal and superior parts of the the articular surface between the scaphoid and lunate bones. [2]

SLL connects the scaphoid bone and the lunate bone to together, providing stability to the proximal carpal row of the wrist.[1] During load bearing activities, large forces are transmitted across the wrist joint. The carpal bones in the distal row distribute axial loads relatively evenly, 50% of the axial load is transmitted through the radioschapoid joint and 35% across the radiolunate joint. The SLL connects these two primary load bearing bones, thus, allowing the wrist the strength to withstand axial loads without giving way. [1]

Scapholunate ligament is the most commonly injured ligament in the hand. SLL injuries, also referred to as ligament sprains are most often due to physical trauma to the wrist. For example, sporting injuries, falls and motor vehicle accidents. The most common mechanism of injury is a fall onto an outstretched hand (FOOSH). SLL injuries can also be a result of chronic conditions such rheumatoid arthritis and pseudogout.[1]

As with other ligament sprains, the severity of the sprain can range from the tearing of a few fibres to a complete rupture of the SLL. A rupture or a tear of this ligament will lead to carpal instability. Scapholunate dissociation is the most frequent carpal instability of the wrist, it refers to the loss of the normal alignment between the scaphoid and lunate bones. About 13.4% of distal radius fractures are associated with scapholunate dissociation.[1] Eventually, untreated SL instability will lead to a progressive form of wrist osteoarthritis referred to as Scapholunate Advanced Collapse (SLAC).[3]

Treatment of SLL injuries varies depending on the degree of injury. Due to insufficient evidence at this time there is no gold standard that can be declared. Currently, conservative options for less severe SLL injuries (predynamic phase) consist of a period of immobilization with casting/splint, activity modification and NSAIDs to manage pain. These patients may also benefit from arthroscopic debridement as they have shown success at reducing pain in patients with partial tears without clinical findings of instability. [4]For more severe SLL injuries for example, complete tears surgical intervention such as pins and wires may be required to hold the scaphoid and lunate bones in place as the ligament heals.[1]