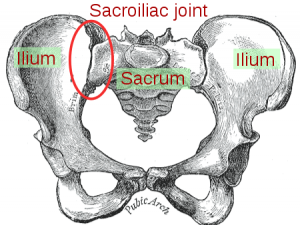 The Sacroiliac joint (simply called the SI joint) is the joint connection between the spine and the pelvis.

Nutation is the motion that occurs when force (weight) is absorbed at the sacroiliac joint, and occurs in the direction of gravitational forces (toward the ground). Counternutation is the body’s response, lifting the joint up against gravity.[6]In most individuals, this motion is limited to 2 to 4 mm of movement due to the bony architecture and ligamentous structures of the joint.[7]

The interosseous sacroiliac ligament forms the major connection between the sacrum and the ilium. It is the strongest ligament in the body and prevents anterior and inferior movement of the sacrum. 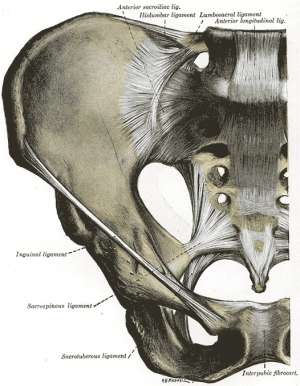 There are 35 muscles that attach to the sacrum or innominates which mainly provide stability to the joint rather than producing movements.[10]

Sacroiliac Joint Dysfunction - broad term that refers to the abnormal biomechanical function of the SI joint. Some causes of sacroiliac joint dysfunction include the following:

Increased mobility of the SI joint may be the result of injury to the supporting ligaments. This can be seen in high impact injuries such as a motor vehicle accident, fall, or repetitive trauma from weight lifting or sports and insufficiency fractures

3. Degeneration - Structural abnormalities of the SI joint may also cause dysfunction. Individuals with altered gait patterns, spinal deformities or leg-length discrepancies can have reduced interlocking ability leading to laxity and pain. This equates to repetitive and uneven stress to the SI joint articular surfaces, causing laxity and pain.

4. Osteoarthritis of the SI joint is also common, and the incidence increases with age. Other risk factors for osteoarthritis include previous trauma.

The reported prevalence of sacroiliac joint pain in cases of chronic low back and lower extremity pain is estimated to be between 10 - 27%[11]. There are several reported predisposing factors for SIJ pain such as a leg length discrepancy, age, arthritis, previous spine surgery, pregnancy and trauma. Compared with face and discogenic low back pain, SIJ pain is more likely to be reported as a specific inciting event, and present unilaterally below L5 and the pain patterns are extremely variable[3]. 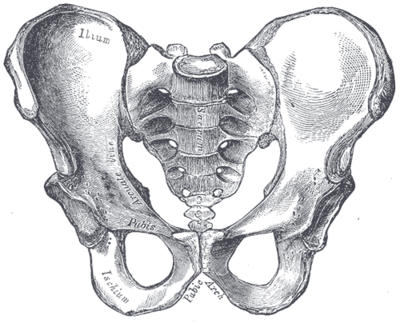 The SI joint goes through many changes throughout life. In early childhood, the surfaces of the joint are smooth and allow gliding motions in many directions.[8] After puberty, the surface of the ilium becomes rougher and coated with fibrous plaques that will restrict motion significantly. These age-related changes will increase in the third and fourth decade and by the sixth decade motion may become noticeably restricted. By the eighth decade, plaque will form and erosions will be present.[3]


The ligaments of the SI ligament complex are weaker in women than in men, allowing the ability to give birth.[14]