Respiratory rate (RR) is a non–invasive and useful assessment tool and abnormalities in respiratory rate have been shown to indicate patient deterioration and should be managed accordingly.[1]

Respiration is a vital process for humans, supplying oxygen to the mitochondria for ATP production (our bodies energy currency). The main byproduct of this process, carbon dioxide which goes through a process to finally be exhaled form our lungs.

The respiratory rate, i.e., the number of breaths per minute, is highly regulated to enable cells to produce the optimum amount of energy at any given occasion.

Image 1: Animation of a diaphragm exhaling and inhaling 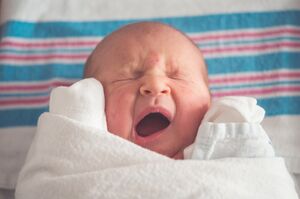 RR is measured by counting the number of breaths a person takes in a one-minute period. The rate should be measured at rest, not after someone has been up and walking about. 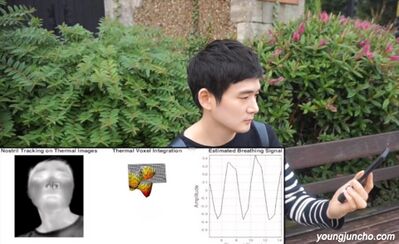 Changes and anomalies in RR are not simply associated with respiratory conditions, they are a good indicator that a patient is struggling to maintain homeostasis. Respiratory rate is an early, extremely good indicator of physiological conditions such as hypoxia (low levels of oxygen in the cells), hypercapnia (high levels of carbon dioxide in the bloodstream), metabolic and respiratory acidosis. Conditions in altered RR include:

Image 2: Researchers at University College London have developed new algorithms that make it possible to use low-cost thermal cameras attached to mobile phones to track how fast a person is breathing. This type of mobile thermal imaging could be used for monitoring breathing problems in elderly people living alone, people suspected of having sleep apnea or babies at risk for sudden infant death syndrome (SIDS).