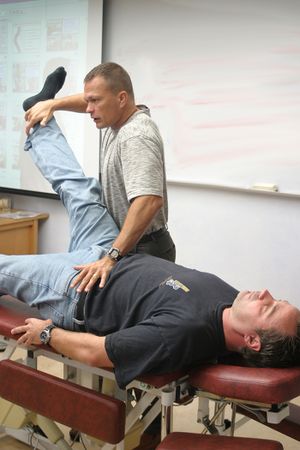 Manual isometric muscle testing is a common clinical technique that is used to assess muscle strength. To provide the most accurate data for the test, the muscle being assessed should be at a length in which it produces maximum force.[1]

Manual isometric muscle is the predominant method used to assess muscle strength in the clinical setting. There are generally two types of test procedures for isometric testing.

While MMT is a commonly used and practical technique, there can be moderate to low inter-rater reliability in the subjective grading of muscle force production.[1]

If a joint is held at a mid range and the patient is asked to isometrically contract using a maximal effort, no strain would fall on the inert structures. eg if the elbow is flexed to 90 degrees and maximal resistance is applied to flexion, the load would fall on the biceps and brachialis. This helps in diagnosis of contractile or inert structures

Weakness: Minor weakness need to be detected with the hands well positioned to offer resistance and counter pressure.