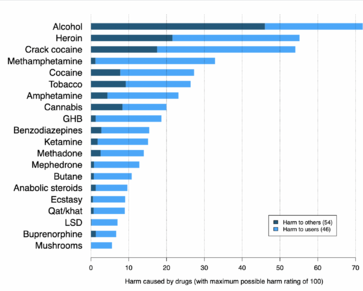 Illicit drug use for recreational purposes is a substantial issue within Western society and causes significant health issues. In Australian society the incidence of use of any illicit drug at least once in a lifetime has been reported to be 38% and even higher for the 20–29 age group.[1] The use of recreational drugs within the sports world has continually evolved which had led officials to create strict regulations with the goal of creating fair and safe opportunities for participating athletes.[2]

The WADA website provides an in-depth description of each category and what each consists of. Of these, the most commonly used substances for recreational drugs in sports are: Alcohol, Cigarettes, Cannabis (for adolescents).[4][5]

The use of recreational drugs or substances varies across the different levels and types of sports. Elite, professional, college, and high school athletes have been known to use drugs for various reasons.[6] A few reasons that have been speculated to influence adolescent athletes in particular, whether positively or negatively, with the use of recreational drugs are: Social activity, Age segregation, Adult supervision, or Motivation for achievement.[7][8]Athletes used these substances to mainly enhance cognition, stamina, strength, and power above and beyond what accepted traditional training methods produced.[9]

Some evidence demonstrates that sports participation is more associated with alcohol use, but negatively associated with cigarette or illicit drug use. Specific sports, such as baseball, football, and weightlifting, have been shown to correlate with higher alcohol consumption when compared to other sports. An increased risk for substance abuse was found to be associated with athletes involved in high contact sports.[10]

The National Institute on Drug Abuse website provides evidence-based screening tools for adult and adolescents for substance abuse. The following link provides not only tools for screening, but up-to-date information about known drugs: http://www.drugabuse.gov/

Treatments for each drugs varies and are normally treated according to the displayed side effects. The website provided above details short and long-term effects, medical management, health effects, available forms for drugs, and possible street names used.

Research demonstrates that the following measures can help reduce the rate of substance abuse in adolescents:[11]

Prevention measures have also included student drug testing within schools, but the evidence is controversial due to only the possibility of lowered marijuana use, but with a corresponding increased use of illicit drugs in the studied middle and high schools.[12]

More information can be found through the National Institute on Drug Abuse website: 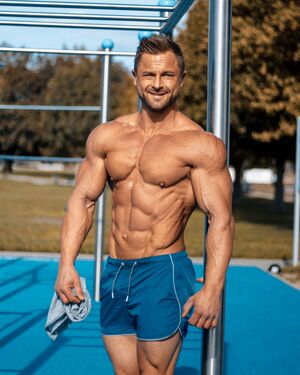 Drugs to get the edge?

Abuse of substances or methods to enhance the performance (PEDs) is becoming very common in the sports, which often destroys the spirit of competition. The regulatory bodies for sports have reported rates ranging from 5% to 31% for the use of performance-enhancing substances among athletes.[13] Athletes can have serious injuries and morbidities, leading to poor health with the use of such substances. Commonly abused agents in sports include anabolic–androgenic steroids and its analogs, blood, erythropoietin, growth hormone and its derivatives, nutritional supplements, creatine, amphetamines, beta-hydroxy-beta-methylbutyrate (HMB), stimulants, and analgesics. Health-care professionals need to be careful while prescribing medicines to sportspersons. Knowledge of exercise physiology, pharmacology of the commonly used agents for sports-related injuries, and agents used for doping could help the sportspersons and health-care professionals to avoid the embarrassment arising because of misuse of these agents.[14]
PEDs and dietary supplements are not regulated or tested by the U.S. Food and Drug Administration (USFDA) and so little regulation can be achieved in regard to product composition, safety, and efficacy which furthers the challenge of monitoring adverse effects.[15], [16] Manufacturers may spike their supplements with actual steroids or other alternatives in an effort to enhance the effects of their products.[17], [15]These same manufacturers may also market products that contain no active ingredients. Such dietary substances are available for purchase over the counter and online by persons of any age without prescription.

This brief video gives an overview of PEDs

Adverse effects of PEDs use and abuse include violent behavior, suicide attempts, hypertension, arrhythmias, myocardial infarction, stroke, seizures, and death. Adverse effects are more prominent and potentially escalated when PEDs are taken in conjunction with various prescription medications and caffeine.[16]
AAS have been labeled a Schedule III substance under the Anabolic Steroid Control Act of 2004 due to its potential for abuse.[16]The Ephedra Prohibition Act of 2004 banned products containing ephedra in the US; although the act was revised to permit the sale of products containing 10mg or less.[19], [16]The World Anti-Doping Code 2009 Prohibition List-International Standard lists the following substances as ‘banned’: anabolic agents and stimulants.[16] The World Anti-Doping Agency did release a Therapeutic Use Exemption (TUE) list of three criteria that would allow an athlete to use banned substances that include: the athlete would experience significant impairment to their health if the medication was withheld; the prohibited substance would not increase the athlete’s performance other than from restoring their health to normality; the athlete could not use a permitted alternative.[19]

Current data reports 14-39% of athletes are utilizing PEDs with a high prevalence of AAS use.[20]The use and abuse of various PEDs, including AAS and other stimulants, has been linked to adolescent imitation of peers, parents, and others while receiving both positive and negative reinforcement by peers and other role models via the Social Cognitive Theory.[16]Demographics such as age, gender, race, year in school, and geographical region may have a direct effect on PEDs use.[16]

Rates for AAS are significantly in favor of the male population while rates for dietary supplements are much higher in the female population.[17], [16]Regionally, the highest rates of illegal drug offers, sales, and use in school occurred in the Southern region of the US followed by the Northeast, Midwest, and Western regions respectively.[16]The rates for AAS use and diet supplementation both range from 6-17% among the adolescent population.[16]The highest rates for PEDs use in the US are in the South Atlantic region. In the female demographic race/ethnicity, and BMI are reported as significant predictors for AAS use. AAS has also been reported as more frequent in populations that describe themselves as feeling sad, hopeless, and those whom reportedly considered committing suicide within the past 12 months.[16]PEDs use has also been reported to have a higher instances in smokers and alcohol drinkers.[21]AAS use is correlated negatively with age, education level, and number of children.[22]Decreased likelihood of AAS use has been correlated with those men with a college education and an annual income greater than 200K. Historically, adolescents abusing AAS may progress to opioid use and abuse later in life, thus developing a drug dependence.[17], [16].

In young men, common side effects of AAS use include acne and oily skin as well as more serious problems related to testicular atrophy, infertility, gynecomastia, and liver toxicity.[19], [17], [21]Females may experience similar skin and liver related toxicity along with facial hair growth, deepening of the voice, menstrual irregularities, and enlargement of the genitalia.[19], [17]Case reports have recently found that AAS-induced liver toxicity will resolve within months after the discontinuation of AAS.[19]

Hypogonadism has been linked to AAS exposure with AAS use being significantly correlated with a lower education level.[22],

Other psychosocial characteristics of AAS users include

Withdrawal symptoms include mood alterations, craving, fatigue, restlessness, loss of appetite and decreased sex drive.[27]The extremes of withdrawal may even include suicidal depression.

The recognition of AAS dependence syndrome has made it increasingly important to understand the origins, mechanism, and consequences of AAS use.[25]

Testing for AAS use is completed through a urine immunoassay that calculates a testosterone: epitestosterone ratio that should be less than 2:1, but have an upper allowable limit of 6:1.[21] Human growth hormone has a short half-life and is difficult to detect, but urinary tests remain the staple for testing relying on the concentrations of recombinant human growth hormone versus naturally derived isotopes.[21] Amphetamines are also detected through their presence in the athlete’s urine.[21]EPO testing is difficult and so identification relies on sophisticated algorithms based on the total amount of circulating hemoglobin.[21]

Healthcare providers have historically been less familiar with PEDs abuse than with other illegal substance abuse.[16] Sport physicians play a large role in the success of athletes, but unfortunately this means that they may have the tendency to push athletes past their natural boundaries.[29]In fact, some physicians have reportedly attested to medical practices outside standard/accepted practices.[29]In order for the proper education and prevention over the use and abuse of various PEDs to occur, health professionals, school psychologists, nurses, and coaches must be aware of the effects of PEDs when taken in combination with prescribe medications, caffeine, and nicotine; they must also pass this same knowledge on to their respective athletes. [16]

The management and treatment for those taking PEDs including those abusing AAS include the periodic deprivation of the substance. The dosage should be weaned down periodically to avoid aggressive withdrawal symptoms. Note that athletes who have abused AAS for long periods may have reduced natural testosterone and must supplement artificial testosterone on a regular basis.[5]

PEDs are used by athletes of all calibers, from high school, to elite athletes, to recreational enthusiasts. Several adverse effects result for the use and abuse of these unregulated substances. Information does exist on these adverse effects, but it is up to the consumer/athlete to seek out this information and educate themselves. For this same reason, healthcare professionals, coaches, athletic trainers, and athletes alike all share the responsibility to educate themselves and each other in order to avoid the life altering/threatening results of PEDs abuse.