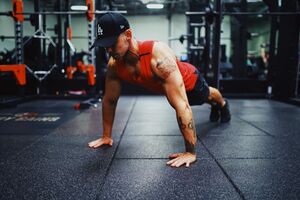 Pushups are an exercise in which a person, keeping a prone position, with the hands palms down under the shoulders, the balls of the feet on the ground, and the back straight, pushes the body up and lets it down by an alternate straightening and bending of the arms[1].

Traditional pushups are beneficial for building upper body strength. They work the triceps, pectoral muscles, and shoulders. Using proper form, they can also strengthen the lower back and core by engaging (pulling in) the abdominal muscles.Pushups are a fast and effective exercise for building strength. They can be done from virtually anywhere and don’t require any equipment[2].

The agonist (prime mover muscle): pectoralis major. As you lower yourself toward the floor, the pecs lengthen and control the speed of your descent. As you push back up again, they shorten. The lowering and lengthening phase of the exercise is called an eccentric contraction while the lifting and shortening phase is called a concentric contraction.

Antagonists (the muscle which opposes the agonist): the main ones are the middle fibers of the trapezius muscle, the posterior deltoids and the rhomboids (all on the opposite side of the torso in relation to your pecs).

Synergists (helper muscles): Although not the target muscle of the exercise, these muscles are important as they assist the agonist. The main synergists in the pushup are the triceps and the anterior deltoids. They assist with elbow extension and shoulder flexion, respectively.

Fixators: rotator cuff (keep the head of your humerus firmly located within the glenohumeral joint), the upper traps help with upward rotation of the scapulae, and core muscles (hold the spine straight). Other fixators include latissimus dorsi muscles (aid in shoulder stability) and quadriceps, which work to keep your legs straight and rigid[3].

One reason for their common use is due to the relative ease of learning the movement, no equipment is necessary for the movement and the exercise can be modified for greater or lesser difficulty depending on the level of physical fitness of the patient.

This adaptability is represented by variations that can be used to modify the basic exercise in order to alter the difficulty of the conventional exercise that requires that the hands be placed in a natural position under the shoulder, the back straight, head up, and lower limb straight using the toes as the pivotal point. 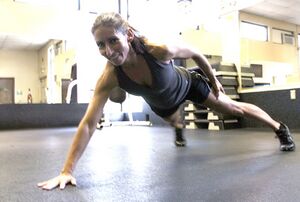 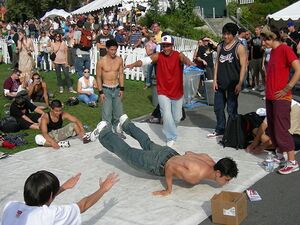 Image 3: A one-armed pushup during a workout in preparation for an upcoming fitness competition.

Recently, adding an unstable surface while performing the push‐up has been suggested in order to increase muscular activity. But research shows that the addition of unstable surfaces in push‐up training does not provide greater improvement in muscular strength and endurance than push up training performed on a stable surface in young men.[6]

Other research suggests that, if a goal is to induce greater muscle activation during exercise, then push-ups should be performed with hands in a narrow base position compared with a wide base position[7].

Image 4: A person effectively doing pushups with just his hands (his feet not touching the ground at all)!