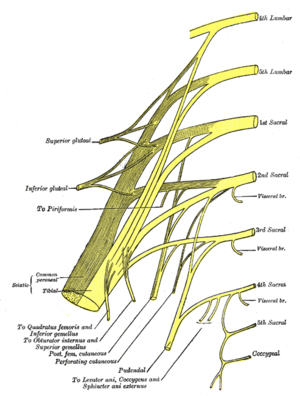 The term 'Pudendal' comes from Latin pudenda, meaning “external genitals”, derived from pudendum, meaning "parts to be ashamed of[1]

The pudendal nerve is a mixed nerve having sensory, motor, and autonomic functions. It is one of the primary nerve originating from sacral plexus following sciatic nerve. The nerve is paired, meaning that it is found bilaterally, one on the left and one on the right side of the body.[3]

There are three main branches of the pudendal nerve. They are:

Management of Pudendal neuralgia is explained on this page Pudendal Neuralgia