Personal Values are “broad desirable goals that motivate people’s actions and serve as guiding principles in their lives".[1] Everyone has values, but each person has a different value set. These differences are affected by an individual's culture, personal upbringing, life experiences, and a range of other influences.[2]

Personal values are desirable to an individual and represent what is important to someone. The same value in different people can elicit different behaviours, eg if someone values success one person may work very hard to gain success in their career whereas someone else may take advantage of others to climb the career ladder.

A person can have many values with an individual assigning more importance to some values over others. It has been shown that the values that are most important to you often guide your decision making in all aspects of your life such as career, religion, social circles, self-identity etc[1].

A personal value is a broad concept and one particular value can be applied to various situations [1]. For example, if an important value to you is loyalty this could be applied to your family, friends or work environment.

Schwartz in 1992 presented 10 motivationally distinct types of values as listed below[1]. These values have been researched in many countries and have been found to be universal in cross-cultural applications. [3][4] 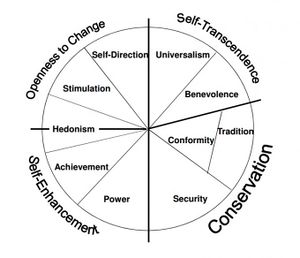 Lists of personal values can be indefinite but research has shown a value will generally fit into one of those 10 types. There is no set of ideal values and everyone will have their own list of values with unique importance assigned to each one.[3] [5]

“Core beliefs are defined as fundamental, inflexible, absolute, and generalised beliefs that people hold about themselves, others, the world, and/or the future”[7]. We use beliefs to help us understand the world around us. A person’s beliefs will guide them in their decision making and response to situations. Beliefs are usually formed in childhood or any other significant formative experience.[8].

Beliefs can be seen as enabling (positive) or limiting (negative).

Enabling beliefs are ones that are optimistic and show good self-efficacy or the belief in yourself that you can achieve something.

Beliefs, positive or negative, are not always true and this can lead a person to make poor decisions based on inaccurate beliefs. Research shows that people with inaccurate negative beliefs about themselves can present with symptoms of anxiety and depression[9].

Beliefs can be categorised into beliefs about one’s self, about others, about the world and the future. These beliefs can either be positive (enabling) or negative (limiting).

It is not always an easy task to identify one’s core beliefs. It can require a great amount of introspection and some people may need the facilitation from a therapist to unlock their core beliefs.[8]

Once limiting beliefs have been identified modification of these beliefs will help to reframe them into enabling beliefs. Reframing beliefs is not a simple task as negative beliefs are often deeply rooted. Again, the need for psychological therapy may be necessary for deeply ingrained beliefs. Wenzel, 2012 [8] describes various strategies that can be applied to modify core beliefs.