Motor ability refers to an infant's capacity to control their body movements. Motor abilities encompass all movements of the body including, waving, kicking, reaching, grasping, etc. Perceptual and motor abilities are collaborative as infants use their perceptual skills to decide on the correct motor action to undertake.[1]

Initially, an infant's perceptual-motor behaviour is spontaneous. During the 1 to 2 month period, infants transition from spontaneous movement to intentional movements. During this period of development, you can expect to see the following:[2] 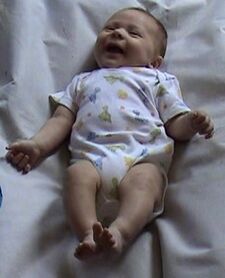 Newborns in the 1-2 month period will begin to demonstrate more complex, sustained and expressive social behaviours. Some of the types of communication and social development you might notice in an infant in the 1 to 2 month period are listed below:[2]

To practise and explore sounds, infants will spontaneously vocalise, producing a range of sounds. Infants can alter these sounds by changing their emotional tone or inflexion. These different sounds will provide the foundation for later babbling and words. Pre-speech sounds such as grunts, squeals and coos are referred to as protophones.[2] 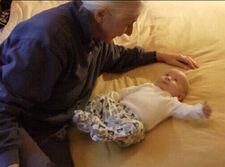 Interactions between the caregiver and infant require clear cues from both the infant and the caregiver to facilitate responses to each other. Taking cues from one another allows the infant and caregiver to change or adapt their behaviour in response to the interaction. This mutual interactive environment teaches the infant communication and social interaction.[3] Caregivers speak to infants in a language called motherese or baby talk. This type of infant directed speech allows adults to alter their acoustic properties to use a higher pitch, increased pitch range and variability, and a slower speech rate. Research shows that these vocal adjustments happen across all populations.[2]

"Various aspects of motherese also known as infant-directed speech (IDS) have been studied for many years. As it is a widespread phenomenon, it is suspected to play some important roles in infant development. Therefore, our purpose was to provide an update of the evidence accumulated by reviewing all of the empirical or experimental studies that have been published since 1966 on IDS driving factors and impacts. Two databases were screened and 144 relevant studies were retained. General linguistic and prosodic characteristics of IDS were found in a variety of languages, and IDS was not restricted to mothers. IDS varied with factors associated with the caregiver (e.g., cultural, psychological and physiological) and the infant (e.g., reactivity and interactive feedback). IDS promoted infants' affect, attention and language learning. Cognitive aspects of IDS have been widely studied whereas affective ones still need to be developed. However, during interactions, the following two observations were notable: (1) IDS prosody reflects emotional charges and meets infants' preferences, and (2) mother-infant contingency and synchrony are crucial for IDS production and prolongation. Thus, IDS is part of an interactive loop that may play an important role in infants' cognitive and social development." [4]

Caregivers will often "mirror" or imitate newborns' facial expressions, jaw and lip movements and vocalisations. This allows the infant to hear and see copies of their own activity.[2] These parental responses are both instinctive and functionally important as they help the infant increase their social communication skills.[5]

** Infants begin to recognise familiar faces and smile at them during the 1 to 2 month period.

Watch this video by Reach Out and Read to see how caregivers and infants communicate: 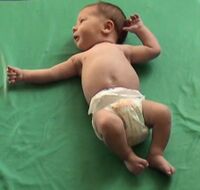 Young infants generally hold their head rotated to one side when lying supine. When the head moves into rotation, the asymmetrical tonic neck reflex (ATNR) might occur (see figure). However, this reflex is not obligatory. By the end of the 1 to 2 month period, infants are more likely to hold their head in the midline when lying supine and can easily turn to either side to explore their environment. Infants can then track an object from the side to the midline, but not across the midline. They can also track an object in the downwards direction.[2] 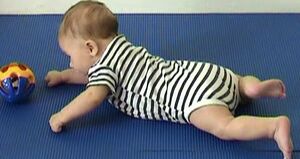 Infants in the 1 to 2 month period can briefly lift their heads up when in a prone position. Their feet remain in dorsiflexion, increasing as they flex their hips and knees, and decreasing as they extend their lower extremities. Kicking can be observed in a prone position. Infants may kick one or both legs. Unilateral kicking is associated with a lateral weight shift in weight-bearing and a lateral flexion of the trunk.[2]

Many infants do not like being placed in prone and quickly get upset and roll from prone to supine. As described below, rolling is initiated in one of two ways (the following describe an infant rolling onto their left side). The infant: 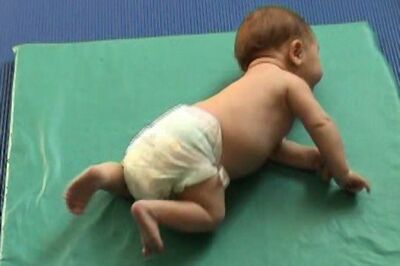 In the second movement sequence, there is no associated hip extension; the hips remain flexed throughout.[2]

Weight-bearing through the hands in prone is seen at the end of the 1 to 2 month period. Extension of the hips is seen with thoracic and head extension. Knee movement does not always couple with hip movement, which allows disassociation and freedom for each joint.[2] 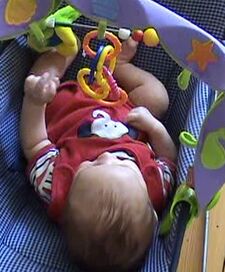 Infant reaching for a toy

Infants in the 1 to 2 month period will reach for a toy by making large swiping motions with their elbow and fingers extended. Predominately, their hands do not make contact with the object. As they move through this period, extension of the fingers becomes less pronounced and small shoulder and elbow movements help facilitate grasping the toy. At around 10-12 weeks old, the infant's ability to steady their head and trunk while moving their upper extremities becomes more consistent. This allows them to reach for fixed or suspended toys. Reaching at this point becomes more goal directed.[2] [9] Flexion and extension of the fingers are often seen as infants interact with various surfaces they encounter.[10][2] Exploring toys with their hands and fingers permits them to learn about the behaviour, structure and texture of an object.[2] 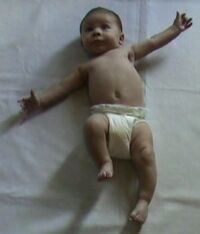 Infants in the 1 to 2 month period have a physiological flexor stiffness at the knees and hips. By 10 weeks, the infant will gain full lower extremity range of motion and is able to extend the hip and knee with an associated anterior pelvic tilt. Single or alternating leg kicking can be seen during this time with hip and knee motions coupled. The feet will occasionally push down on a surface, causing lateral trunk weight shift with trunk and head extension. The feet will demonstrate increased plantarflexion during this time as well.[2] 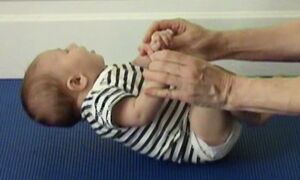 Infants can pull to sit keeping their head in line with their trunk when they are 1-2 months old. As they anticipate being pulled up, they can activate their trunk and neck flexor muscles while stiffening their hips and upper extremities. Once upright, these infants are able to move their head to gaze at the person lifting them.[2] 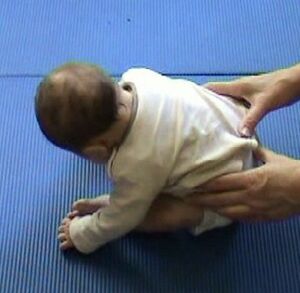 At around 6 weeks, infants can extend their thoracic spine and head when supported around their waist. When they are closer to 2 months, infants can maintain a semi-erect position with support at their hips. This facilitates their neck and trunk extensors.[2]