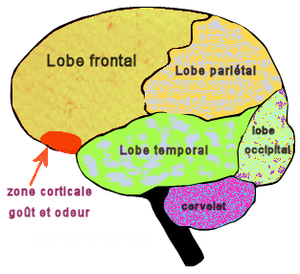 The Olfactory Cortex is the portion of the cerebral cortex concerned with the sense of smell. It is part of the Cerebrum. It is a structurally distinct cortical region on the ventral surface of the forebrain, composed of several areas. It includes the piriform lobe and the hippocampal formation.[1]

Image 2:  Human skull. The top part of the skull. is removed. Cribriform plate shown in green and Olfactory nerve shown in yellow. 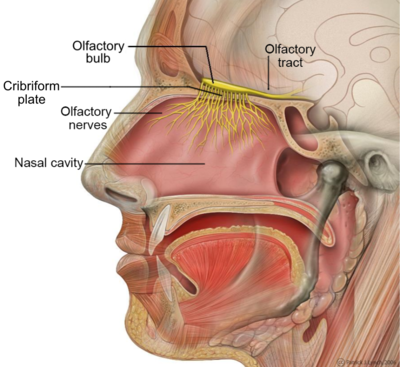 Our sense of smell is a complex process that depends on sensory organs, nerves, and the brain[2]. We have about 4 million smell cells in our noses, divided into about 400 different types. Each smell cell carries just one type of receptor or 'lock' on it, the smell floats through the air, fits into the 'lock' and then activates the cell[3]

The olfactory system is often described as the most "primitive" sensory system because of its early phylogenetic development and its connections to older, subconscious portions of the brain (olfactory cortex and its' connections to the limbic system, which is important in emotional states and in memory formation. Thus, a smell frequently activates intense feelings and memories before a person even identifies the odor.[4]

There is tremendous genetic variability within and between populations for our ability to detect odours. Studies have shown that people who are unable to smell one or one class of odors frequently have small genetic differences from the general population. 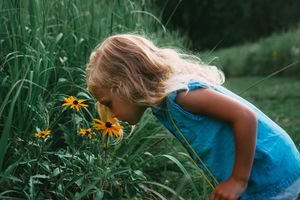 Neurogenesis is the process by which new neurons are formed in the brain. Neurogenesis is crucial when an embryo is developing, but also continues in certain brain regions after birth and throughout our lifespan.