The Noble’s test (also known as Noble's Compression test) is a provocative test of the iliotibial band, developed by Clive Noble. It is commonly used as an indication for iliotibial band syndrome; however, no evidence-based research has been done yet to control the validity of this test. Other tests that could be used are the modified Ober’s test and the Renne Creak test. [1][2][3]

During walking and running, the Iliotibial band is subjected to frictional and compressive forces over the lateral epicondyle. Repetitive strain, improper footwear, lower extremity mal-alignments and muscle imbalance cause increased friction.[5] Iliotibial band (ITB) friction syndrome is an overuse injury common in runners, cyclists, weightlifters, skiers, and soccer players. It is characterized by pain over the lateral femoral epicondyle. 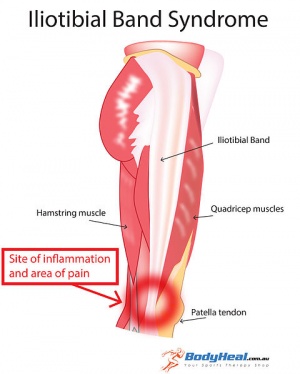 Procedure: The patient is supine or side-lying with the injured side up. Grasp just above the ankle and slowly bend the knee back and forth several times from 0-90° while palpating and applying firm pressure on the lateral epicondyle of the femur for crepitus with the thumb of the other hand.

Interpretation: Palpable snapping, rubbing or “squeaky hinge-like” crepitus or localized pain that increases with pressure at or above the epicondyle (often at 30° of flexion) indicates ITB syndrome.

This test is indicative of iliotibial band syndrome, but again it must be stated that there have been no studies to indicate the validity of this test.[2][4]