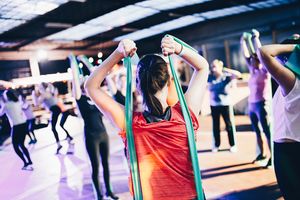 Regular exercise is an effective way to maintain health. It also results in various physiological adaptations in the neuromuscular, cardiovascular and respiratory systems of the human body. These adaptations can improve physical performance.[1]

The overload principle is responsible for the improvement in exercise as well as the adaptation to exercise. The muscular system can be mechanically or metabolically overloaded. These mechanisms result in specific and different adaptations that enhance performance.[1]

The magnitude of these adaptations are dependent on:[1]

There is also emerging evidence for other factors also playing a role such as:[2]

The mode of exercise (e.g. strength training or endurance training) influences the type and magnitude of adaptation in the neuromuscular system. For example, if endurance training (high repetition, low load contractions) is undertaken the muscular system will undergo specific changes that target aerobic metabolism and improved fatigue resistance. Strength training (low repetitions with high load contractions), in contrast, will cause muscle adaptations such as increased myofibrillar protein synthesis. As a result muscle size, strength and power may increase and improve.[1]

Another principle to consider is specificity. The type of exercise performed is important to consider within the context of training. The principle of specificity states that only the system or body part repeatedly stressed will adapt to chronic overload. Thus, "specific exercise elicits specific adaptations creating specific training effects."[3]

Progressive resistance training refers to any type of training that aims to increase muscle strength, power and size through muscular contraction. This mode of exercise relies on the overload principle where strength is improved and muscle growth stimulated by exercising/working a muscle close to its maximal force-generating capacity. A typical programme might involve 6-8 repetitions of lifting and lowering a weight, with these sets being repeated 3-4 times and using loads that are equal to approximately 70-80% of the maximum weight that can be lifted once (1-RM).[1]

Skeletal muscle will adapt to mechanical overload by increasing muscle size. With resistance training various signalling mechanisms are activated and these initiate the creation of new proteins and the enlargement of muscle fibre and muscle cell size leading to hypertrophy with little evidence showing an increase in the number of muscle fibres (hyperplasia) taking place.[1][12]Various adaptations include:

It is well-known that muscle is sensitive to training loads. The muscular system is a dynamic system with proteins being synthesised and degraded. For muscle growth, the balance between protein synthesis and degrading needs to be changed. This can occur by either increasing the synthesis rate or decreasing the rate of degrading or a combination of both.[1]

The above-mentioned findings clearly show that adaptations to muscle are dependent on nutrition availability. The protein synthesis and breakdown response post-exercise can be adjusted by altering the availability of certain nutrients. Both, resistance training and amino acid ingestion increases protein synthesis[1][18]. When these two factors are combined it has an even bigger effect.[19] The consumption of protein post-exercise does the following:

Satellite cells are specialised muscle stem cells located in a niche between the basal lamina and the sarcolemma of a muscle fibre. They aid in the growth and repair of all skeletal muscle. These cells are activated by muscle damage and/or sufficient exercise. Once these cells are activated they proliferate differentiate and fuse to an existing myofibre, and in this way forming new contractile proteins and repairing the damage.[1] Resistance training results in an increase in the number of satellite cells within four days of training[21]. With continued resistance training over an extended period of time satellite cell numbers can increase by ~30% and can furthermore remain elevated even if training is stopped.[22]

Another important role of satellite cells is the donation of their nuclei to act as post-mitotic nuclei in the growing muscle fibre.[1]

Endurance training is focused on increasing muscle fatigue resistance for the exercise of a longer duration.[1] Fatigue is defined as: "a loss in the capacity for developing force and/or velocity of a muscle, resulting from muscular activity under load and which is reversible by rest."[23] Performance in endurance activities is dependent on the body's ability to produce sufficient ATP through aerobic respiration. This process requires the neuromuscular, cardiovascular and respiratory systems to interact. The focus will be more on the local adaptations that happen in skeletal muscle for the purpose of this page.

Essentially, endurance training and activity enhances the oxidative capacity and metabolic efficiency of skeletal muscle. The adaptations that it achieves this through are: oxygen utilisation (mitochondrial adaptations), oxygen delivery (angiogenesis) and local substrate availability.[1]

Mitochondria are the "powerhouse" of the cell. These organelles generate the majority of the cell's supply of ATP through aerobic respiration.[1] Endurance training can:

With the increased number and size of mitochondria, the proportion of pyruvate formed during glycolysis passing into the mitochondria for oxidative phosphorylation is increased with less use for the production of lactate and its by-products. As a result the exercise intensity, which can be sustained through relying on aerobic metabolism, is higher.[1]

The network of capillaries adjacent to the muscle fibres is responsible for the diffusive exchange of gasses, substrates and metabolites between the circulation and the working muscle fibres. Endurance training results in:

With endurance training the following adaptations occur in the neural system: