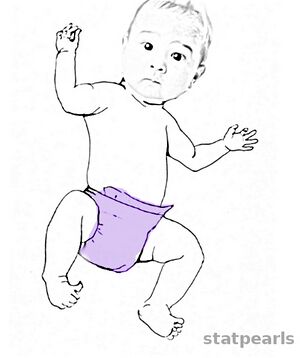 The Moro reflex was first described by Ernst Moro in 1918 and is a primitive infantile reflex that causes an involuntary protective motor response. The response produced is due to sudden stimulation and not due to the distance of the drop. It's mainly concerned with the extension and abduction of the upper extremities. It is elicited by pulling off the baby's arm in the supine position and then letting the arms go to produce the sensation of falling. It is easily confused with a startle pattern or reflex. This reflex is said to be of labyrinthine origin.

It is important to note that it can't be elicited in premature babies due to lower muscle tone which further does not allow resistance to passive movements. The absence and hyper-response of this reflex are of diagnostic value.[1]

Head Drop Method: Supine position. Suspend the baby horizontally, in a symmetrical supine position such that the therapist's one hand behind the chest and the other supports the head. The infant's head should be in the midline position.[2]

It is important to guarantee that both the infant's hands are open at the moment of elicitation of the reflex so as not to produce an asymmetrical response. Also, ensure that the baby is awake and not crying during the examination.

Head Drop Method: Dropping the head of the baby by a few centimetres.

Baby Drop Method: The therapist lowers their hands rapidly about 10 to 20 cm and brings them to an abrupt halt.

Subcutaneous Stimulus: Painful stimulus to the subcutaneous tissue of the epigastrium. ( considered to be a more sensitive technique)

After Phase: Arms adduct and the hands come to the front of the body before returning to the infant's side.

The disintegration of the reflex within 2 to 3 months of age.

Persistence of the response beyond 6 months of age.

This reflex can be stimulated in all neonates during the first 12 weeks of age and disintegrates by 6 months of age.

The examiner holds the infant in the supine position and drops the head slowly downwards. Abduction of upper extremities followed by extension of arms with a fingers extension is seen.

This reflex is primarily elicited with the help of vestibular nuclei. It is mediated by the brainstem and therefore its centre seems to be in the lower region of the pons to the medulla. The efferent pathways of the response seem to originate in the vestibulospinal and/or reticulospinal neurons and the reflex movement is generated by the subcortical structures without cortical participation.[2]

The Difference between Moro and Startle Reflex[edit | edit source]

The startle reflex, the response to a sudden stimulus, is one of the defensive reactions and consists essentially of flexion movements. It differs from the Moro response which is characterized by extension.

The startle reaction is induced by an auditory stimulus which shows clear habituation in premature infants, whereas the Moro reflex does not stimulate due to any auditory cues.

The startle reaction can not be elicited in anencephalic newborns, while the Moro reflex is always elicited in these infants.