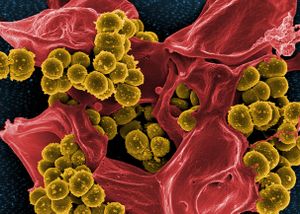 Methicillin-resistant Staphylococcus aureus (MRSA) is a bacterium that causes infections in different parts of the body. It's tougher to treat than most strains of staphylococcus aureus -- or staph -- because it's resistant to some commonly used antibiotics. R image - scanning electronic microscope of MRSA and a dead neutrophil.

The bacteria from which MRSA arises, staphylococcus aureus, is found in the skin and in the nostrils of one third of all people whom do not show any symptoms of having been exposed to the bacteria. These carriers of the bacteria are then exposing the bacteria to all of the items that they touch as well as expelling it into the air where it will remain until the item is next cleaned.[2] 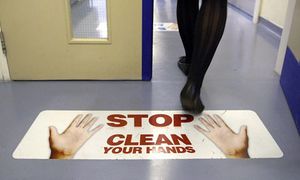 Methicillin resistance has occurred in S. aureus by mutation of a penicillin-binding protein, a chromosome-encoded protein. This type of resistance is transferred between S. aureus organisms by bacteriophages. This is one of the only medically relevant examples of chromosome-mediated drug resistance by phage transduction.[1] 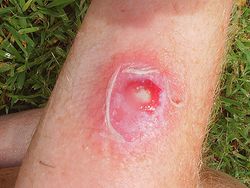 MRSA can cause a range of organ-specific infections, the most common being the skin and subcutaneous tissues, followed by invasive infections like osteomyelitis, meningitis, pneumonia, lung abscess, and empyema. Infective endocarditis caused by MRSA is associated with an increased morbidity and mortality compared to any other organism and is linked to intravenous drug abuse.

Skin and soft tissue infections (SSTI): CA-MRSA is a predominant organism associated with SSTIs like cellulitis, necrotizing fasciitis, and diabetic foot ulcers. It also is increasingly associated with more invasive disease than those due to non-MRSA. More frequently these infections are multidrug-resistant leading to frequent recurrence, increased hospitalization, and mortality.

Pneumonia: Staphylococcal pneumonia - CA-MRSA can cause life-threatening necrotizing pneumonia in otherwise healthy individuals. It is characterized by severe respiratory symptoms, high fevers, hemoptysis, and hypotension. It rapidly progresses to sepsis and septic shock with leukopenia and elevated C-reactive protein. Multilobar cavitating alveolar infiltrates in a clinical setting like this is consistent with CA-MRSA infection.

MRSA is also a leading cause of hospital-acquired and ventilator-associated pneumonia.

Endocarditis: MRSA is an important cause of bacterial endocarditis which can cause mortality in about a third of the infected patients (30-37%). Right-sided MRSA endocarditis is commonly associated with intravenous drug use and intravenous catheters. Patients with tricuspid valve vegetations may have septic pulmonary emboli causing nodular infiltrates and cavitating lesions in the lungs. Similarly, patients with involvement of mitral and aortic valves may have secondary infections in distant foci such as bones and joints, kidneys, brain, and other organs. It is important to take history and perform a thorough examination of these patients combined with necessary labs and radiological tests.[1]

Differences in Characteristics Between HA-MRSA and CA-MRSA[3]

The selection of empiric antibiotic therapy for the treatment of MRSA infection depends on the type of disease, local S. aureus resistance patterns, availability of the drug, side effect profile, and individual patient profile.

SSTIs: For most uncomplicated SSTIs suspected of MRSA infection, empirical treatment is with oral antibiotics like trimethoprim/sulfamethoxazole, tetracyclines, such as doxycycline or minocycline, and clindamycin.

Parenteral antibiotics are indicated for invasive SSTIs or with signs of systemic involvement, inadequate response to oral therapy, or if an SSTI occurs adjacent to an indwelling device.

Daptomycin is a suitable parenteral alternative when vancomycin is not available or not being tolerated. Other short-acting options include ceftaroline and telavancin. Long-acting treatment options include dalbavancin and oritavancin. Regardless of the initial empiric antibiotic choice, subsequent therapy should be tailored based on the careful review of culture and susceptibility data.

The duration of therapy for treatment of MRSA SSTIs may range from 5 to 14 days depending on the extent of infection and response to treatment.[2]

Clinical Laboratories for MRSA, according to the Clinical and Laboratory Standards Institute (CLSI)[4]


Broth Microdultion Testing with the addition of one of the following:

Typically the broth test and agar test are the main tests for detecting MRSA, and the cefoxitin disk screen test can be used as a back-up test.
• Detecting oxacillin/methicillin resistance can be difficult because of the presence of multiple populations (susceptible and resistant) may coexist within one culture of staphylococci.
• Oxacillin and cefoxitin are tested instead of methicillin because methicillin isn’t as readily available in the US as it once was. Oxacillin detects subpopulations well and cefoxitin activates mecA gene better, making it a more accurate test than other using oxacillin.
• Methicillin and oxacillin are in the same class of drugs. Methicillin has historically been the drug of choice for detecting resistance, hence the name MRSA. Even though the preferred drug of choice for testing has changed, the name had remained the same.
According to Centers for Disease Control and Prevention, there are additional tests to detect oxacillin/methicillin resistance but the most common and reliable tests have been listed above.

Further screening should be done to rule out such diseases.