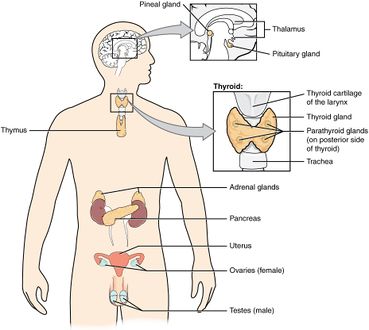 The endocrine system works via chemical messengers (hormones) that are secreted directly into the circulatory system to regulate target organ function. The feedback loop works to control the release of these hormones and maintain homeostasis i.e the state of steady conditions vital for life.[1]

Each gland of the endocrine system releases specific hormones into the bloodstream. These hormones travel through circulatory system to other cells and help to coordinate body processes.

A malfunction in the endocrine systems (either the glands, hormones, receptors or organs impacted by hormones) can cause an endocrine disorder. The various dysfunctions can cause wide-ranging effects on the body. The disorders arise from the effects caused by too little or too much secretion of a hormone or problems with receiving the hormone.[3] A metabolic disorder occurs when an improper level of a hormone alters the body’s metabolism and impacts its function (for example, diabetes).[4][5]

Endocrine disorders with U.S. prevalence estimates of at least 5% in adults included diabetes mellitus, impaired fasting glucose, impaired glucose tolerance, obesity, metabolic syndrome, osteoporosis, osteopenia, mild-moderate hypovitaminosis D, erectile dysfunction, dyslipidemia, and thyroiditis. Erectile dysfunction and osteopenia/osteoporosis had the highest incidence in males and females, respectively. The least prevalent conditions, affecting less than 1% of the U.S. population, were diabetes mellitus in children and pituitary adenoma. Conditions with the lowest incidence were adrenocortical carcinoma, pheochromocytoma, and pituitary adenomas. Certain disorders, such as hyperparathyroidism and thyroid disorders, were more common in females. As expected, the prevalence of diabetes mellitus was highest among ethnic minorities.[7] 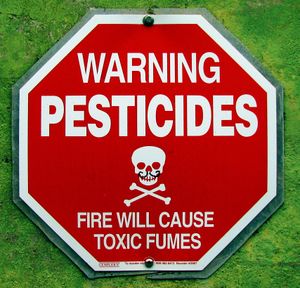 Endocrine disruptors are chemicals that can interfere with endocrine systems at certain doses. These disruptions can cause cancerous tumors, birth defects, and other developmental disorders. Any system in the body controlled by hormones can be derailed by hormone disruptors. Specifically, endocrine disruptors may be associated with the development of learning disabilities, severe attention deficit disorder, cognitive and brain development problems deformations of the body that includes breast cancer, prostate cancer, thyroid and other cancers; sexual development problems such as feminizing of males or masculinizing effects on females, etc.[9]

There are some 800 chemicals suspected as being capable of interfering with hormone receptors, synthesis, conversion or cell signalling during critical periods of cell and organ development. Some of these occur naturally, but many are synthetic and used in agriculture (growth promoters, pesticides and wetting agents), plasticizers, as flame-retardants in textiles, clothing and furnishings, non-stick coatings, food additives, electronics and cosmetics, personal care products and perfumes.[10]

Due to the wide range of symptoms and conditions diagnosis can sometimes be difficult and where available, a referral to an endocrinologist may be made. In most cases blood and urine analysis will be carried out to determine hormone levels. If a nodule or a tumor is suspected imaging tests may be done to help locate and/or confirm any abnormalities. Due to the complex nature of hormones and their interactions a change in one hormone level can have a detrimental impact on another, which can affect diagnosis and treatment.[1][9]

Although management interventions and scope can vary depending on the type of disorder, physiotherapy can be beneficial for people with these conditions. Common goals are the management of pain to optimise function and mobility, patient education on the effects of the endocrine disorder on the body and how to maintain strength and fitness, energy conservation techniques and development of manageable and progressive exercise plans.[10][11][12].