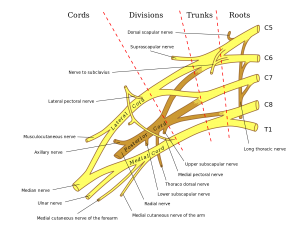 The Median Nerve extends along the middle of the arm and forearm to the hand. It arises by two roots, one from the lateral and one from the medial cord of the brachial plexus; these embrace the lower part of the axillary artery, uniting either in front of or lateral to that vessel. Its fibers are derived from the sixth, seventh, and eighth cervical and first thoracic nerves.

As it descends through the arm, it lies at first lateral to the brachial artery; about the level of the insertion of the Coracobrachialis it crosses the artery, usually in front of, but occasionally behind it, and lies on its medial side at the bend of the elbow, where it is situated behind the lacertus fibrosus (bicipital fascia) and is separated from the elbow-joint by the brachialis.

In this situation, it lies behind, and rather to the radial side of the tendon of the Palmaris Longus, and is covered by the skin and fascia. It then passes behind the transverse carpal ligament into the palm of the hand. In its course through the forearm, it is accompanied by the median artery, a branch of the volar interosseous artery. [1]

C5 to C7 roots from lateral cord of brachial plexus

C8 and T1 roots from medial cord of brachial plexus

With the exception of the nerve to the Pronator teres, which sometimes arises above the elbow-joint, the median nerve gives off no branches in the arm. As it passes in front of the elbow, it supplies one or two twigs to the joint.

In the forearm its branches are:

Deep muscles on the front of the forearm, except the ulnar half of the Flexor digitorum profundus 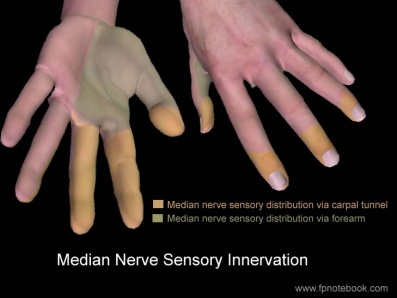 It pierces the volar carpal ligament and divides into:

There are three entrapment syndromes involving the medial nerve or its branches:

Is a common condition that causes a tingling sensation, numbness and sometimes pain in the hand and fingers. These sensations usually develop gradually and start off being worse during the night. They tend to affect the thumb, index finger, and middle finger.

Other symptoms of carpal tunnel syndrome include:

AINS is a pure motor neuropathy, as the anterior interosseous nerve contains no sensory fibers; dull forearm pain is however sometimes mentioned by patients.

AINS can be confounded by the Martin-Gruber anastomosis, present in up to 25% of the population: in these cases, the anterior interosseous nerve gives off branches to the ulnar nerve, creating atypical motor innervation patterns of the forearm and hand and thus effacing the typical clinical symptoms. [4]

Due to the position of this muscle that sits over your median nerve, the pressure on the nerve can elicit pain while hindering your forearm movement. It occurs when your pronator teres muscle becomes tight or overworked, compressing the median nerve. Hammering, repeatedly using a screwdriver, cleaning fish can lead to overuse of the pronator teres. Symptoms include pain and reduced mobility. Carpal Tunnel Syndrome symptoms are often confused with PTS, however in this case symptoms worsen with elbow movements.

The median nerve is particularly vulnerable to damage at the elbow and wrist.

Injury at the elbow[edit | edit source]

Most common injury = Supracondylar fracture of the humerus.

This results in the flexors and pronators in the forearm being paralyzed, with the exception of the flexor carpi ulnaris and medial half of flexor digitorum profundus.

The forearm constantly supinated, and flexion is weak (often accompanied by adduction, because of the pull of the flexor carpi ulnaris).

Flexion at the thumb is also prevented, as both the longus and brevis muscles are paralysed.

The lateral two lumbrical muscles are paralyzed, and the patient will not be able to flex at the MCP joints or extend at IP joints of the index and middle fingers.  So on trying to flex the fingers and thumb to make a fist, the 1st 3 digits remain in extension, and the posture is known as the "hand of benediction".

NB In lesions of the Ulnar Nerve the same posture occurs with the hand at rest, due to paralysis of the medial lumbricals. In these cases, it is known as the "ulnar claw".

Injury at the wrist[edit | edit source]

Most common injury =  Lacerations just proximal to the flexor retinaculum.

Motor functions: Thenar muscles paralysed, as are the lateral two lumbricals. This affects the opposition of the thumb and flexion of the index and middle fingers.

Sensory functions: Same as an injury at the elbow.

Characteristic signs: Same as an injury at the elbow, i.e. hand of benediction on attempting to make a fist.

Signs of a median nerve lesion include weak pronation of the forearm, weak flexion and radial deviation of wrist, with thenar atrophy and inability to oppose or flex the thumb;
- sensory distribution includes thumb, radial 2 1/2 fingers, and the corresponding portion of palm.
- w/ intact nerve, thumb e thcan be pronated, lining up nails at or near 180 deg;
- w/ median nerve palsy, thumb can't be pronated & nail is < 100 deg [2]

Extending the elbow and wrist, two key components of the upper limb tension test, puts the median nerve under tension. Rotating the head and neck to the opposite side puts the nerve under increasing stretch. If the entrapment is in the inter scalene triangle then raising the arm above the head usually increases the response. The purpose is to test for C5, C6, C7 nerve roots and median nerve as the source of the patient’s painful shoulder and arm.[5]