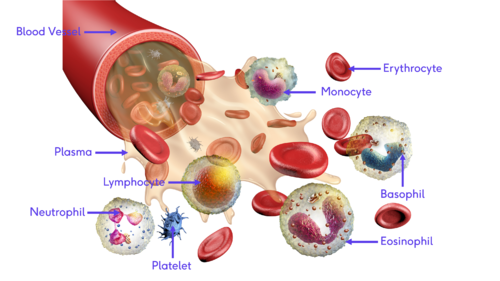 Leukocytes (also called white blood cells) are a cellular component of the blood that lacks hemoglobin, has a nucleus and is capable of motility, They defend the body against infection and disease by: ingesting foreign materials and cellular debris; by destroying infectious agents and cancer cells; or by producing antibodies[1].

White blood cells are produced by bone marrow and their levels of production are regulated by organs such as the spleen, liver, and kidneys.

Our bone marrow is constantly producing white blood cells because they have a limited lifespan of only 1 to 3 days. WBC are stored in the blood and the lymphatic tissues. The number of leukocytes is an indicator of your health. 4,000-11,000 per µL of blood is the normal count, which is 1% of the total volume of blood in an adult[3].

Most people will produce around 100 billion white blood cells every day. Fluctuations in white cell number occur during the day; lower values are obtained during rest and higher values during exercise. 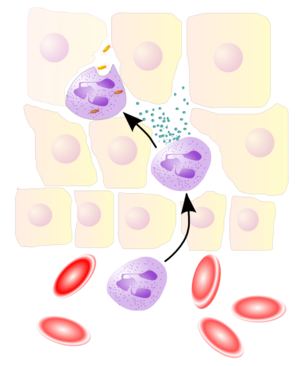 Although white cells are found in the circulation, most occur outside the circulation, within tissues, where they fight infections (the few in the bloodstream are in transit from one site to another). Leucocytes make their own way across blood vessels. They soften their bulky nuclei and push them to the front edge of their cells and then probe apart the scaffolding in the blood vessel walls and squeeze through. This process snaps smaller, threadlike fibers that form the flexible scaffolding of blood vessel walls, the cells easily repair that breakage later as part of routine cellular maintenance.[5]

Image: Neutrophil granulocyte migrates from the blood vessel to the matrix, secreting proteolytic enzymes, in order to dissolve intercellular connections (for improvement of its mobility) and envelop bacteria through Phagocytosis. 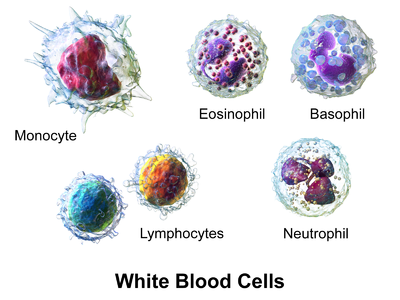 There are several different types of white blood cells, each with varying responsibilities:

Lymphocytes: These are vital for producing antibodies that help the body to defend itself against bacteria, viruses, and other threats.

Neutrophils: These are powerful white blood cells that destroy bacteria and fungi. These cells have a single nucleus with multiple lobes. Neutrophils are the most abundant white blood cell in circulation. They are chemically drawn to bacteria (by cytokines) and migrate through tissue toward infection sites. Neutrophils are phagocytic (ie they engulf and destroy target cells). When released, their granules act as lysosomes to digest cellular macromolecules, destroying the neutrophil in the process.

Basophils: These alert the body to infections by secreting chemicals into the bloodstream, mostly to combat allergies. They are the least numerous type of white blood cells. They have a multi-lobed nucleus and their granules contain immune-boosting compounds such as histamine and heparin. Heparin thins the blood and inhibits blood clot formation while histamine dilates blood vessels to increase blood flow and the permeability of capillaries so that leukocytes may be transported to infected areas.

Eosinophils: These are responsible for destroying parasites and cancer cells, and they are part of an allergic response.  The nucleus of these cells is double-lobed and appears U-shaped in blood smears. Eosinophils are usually found in connective tissues of the stomach and intestines. These are also phagocytic and primarily target antigen-antibody complexes formed when antibodies bind to antigens to signal that they should be destroyed. Eosinophils are most active during parasitic infections and allergic reactions.

Monocytes: These cells are the greatest in size of the white blood cells. They have a large, single nucleus that comes in a variety of shapes but is most often kidney-shaped. Monocytes migrate from blood to tissue and develop into either macrophages and dendritic cells.