Lake Louise Questionnaire for the Symptoms of Acute Mountain Sickness 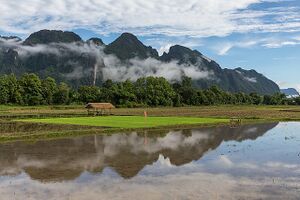 Acute Mountain Sickness (AMS) is the most common acute altitude illness that can occur in unacclimatized individuals at altitudes >2500m. Risk factors include, rate of ascent, altitude of ascent, and individual physical characteristics. [1] However, even if someone has AMS, or mild AMS, it does not mean that they must descend immediately. [2]

AMS must not be interchanged with high-altitude cerebral edema (HACE). It is not a neurological condition, and is known to be self-limited. AMS effects may become apparent within 6 hours of ascent. Contrarily, HACE may occur between 24-72 hours after ascent, has characteristics of an altered mental state and/or ataxia. It usually occurs in conjunction with AMS or high-altitude pulmonary edema, and would be characterized as a medical emergency. [1]

The Lake Louise Acute Mountain Sickness (AMS) scale was created to assess adults of AMS. [2] It was first developed in 1991. It is a very useful scale to help diagnose and score the severity of AMS. [1]

The symptoms measured on the initial test included, [1]

*the double words are for general feelings and descriptions

These are rated with an intensity level of 0-3. A total score that is ≥3, including a headache, is indicative of AMS. [1]

Of the five symptoms assessed for AMS, disturbed sleep is the most likely symptom to occur due to altitude hypoxia. However, this symptom was seen to be poorly related to the other symptoms, and AMS. It was questioned if sleep disturbance was a symptom of AMS or an effect of hypoxia. Considering this fact, a revised scoring system does not include 'disturbed sleep' as a symptom. Comparing daytime vs. night time effects of altitude was also a factor. [1]

About the Test[edit | edit source]

Since the 'sleep disturbance' symptom was removed, a scoring of ≥3 from the four remaining symptoms, including a headache, is indicative of AMS. [1]

If someone wanted a more detailed scoring system, they could categorize intensity values as: [1]

Despite symptoms being able to develop within 6 hours of ascent to altitude, it is recommended that the score be assessed subsequent to 6 hours, to bypass any symptoms of travel or effects of acute hypoxia via vagal responses. [1]

Characteristics of the Test[edit | edit source]

The AMS Clinical Functional Score can be used if someone wanted to assess the effect of AMS symptoms on overall health, function, and performance. [1]

AMS Clinical Functional Score - Overall, if you had AMS symptoms, how did they affect your activities?

A Conflict - a measurement for all ages?[edit | edit source]

It appears that the language used in the Lake Louise AMS scoring system may underestimate symptoms for children from 4-11 years of age, due to the complexity of the terminology used. This may be due to individual language, behavioural, and cognitive development at their given age. Young children were seen to report symptoms without any altitude gain, therefore the wording of the scale needed to be revised.[3]

AMS can also occur in children, those children from families who go on mountain hiking and trekking trips. It is seen that this scale is not suitable for use by children, but it is suitable for teenagers to understand and categorize their physical and physiological feelings. [3]

It is seen that children can develop AMS at a comparable rate to adults when ascending to similar altitudes, over the same durations. [3]

When assessing children on the Lake Louise Scoring System (LLSS), there was an age-adjusted scoring system used. Descriptions such as "severe nausea and vomiting, incapacitating" were modified with "really upset stomach and throwing up a lot". The word "hurt" was used to describe "pain", and the Wong-Baker FACES pain scale was used to describe the severity of headaches. The FACES scale can be seen on pg. 3 (126) in the Southard et al, reference. [3]

It is seen that younger children are more satisfied with the FACES scale, and simplified wording due to lack of understanding, whereas older children may select more specific descriptions and moderate values for the pain scale. [3]

For this reason, it is shown that when the language is simplified, more honest, valid, and reliable symptom descriptions are reported. The simplification in language does help this age group. [3]

How to Conduct the Test[edit | edit source]

According to Roach et al, 2018, this test is only to be conducted by investigators, and not Clinicians, Professional Outdoor Guides, and general individuals, for the diagnosis and management of AMS. [1] However, it is safe for the general public to use on their own mountain climbing trips. When on tour on the mountain, guides will conduct an assessment twice a day, which includes the LLSS, pulse oximetry, and other criteria, to check for health and fitness of the climbers on the mountain. [2]

The Lake Louise AMS score can be administered as: [1]

What the Results Mean[edit | edit source]

The total AMS score would be the sum of scores for each of the four symptoms, listed below: [1]

To be categorized as having AMS, one would need to have atleast 1 point for a headache, and ≥3 points in total.

*A severe headache of 3 point, with no other AMS symptoms, would also be categorized as AMS. [1]