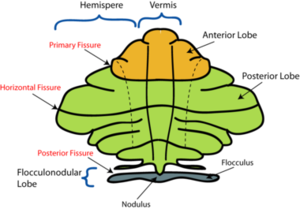 JS is characterized by the absence or underdevelopment of the cerebellar vermis - an area of the brain that controls balance and coordination -- as well as a malformed brain stem (molar tooth sign).

Image 1: Anatomical Lobes of the Cerebellum

The most common features of Joubert syndrome in infants include:

Many cases of Joubert syndrome appear to be sporadic (not inherited). In most other cases, Joubert syndrome is inherited in an autosomal recessive manner (meaning both parents must have a copy of the mutation) via mutation in at least 10 different genes, including NPHP1, AHI1, and CEP290.[2]

Often these findings are accompanied by

The clinical diagnosis of JS is based on the presence of the following characteristic:

JS is caused by pathogenic mutations in 34 genes, 33 of which are autosomal recessive and one of which is X-linked. Identification of biallelic pathogenic mutations in one of the 33 autosomal recessive JS-related genes or a heterozygous pathogenic variant in the one X-linked JS-related gene can lead to a molecular diagnosis of JS in roughly 62 percent -94 percent of people with a clinical diagnosis of JS.[2]

Annual evaluations of growth, vision, and liver and kidney function; periodic neuropsychologic and developmental testing. Agents/circumstances to avoid: Nephrotoxic medications such as nonsteroidal anti-inflammatory drugs in those with renal impairment; hepatotoxic drugs in those with liver impairment.

JS is predominantly inherited in an autosomal recessive manner. JS caused by pathogenic variants in OFD1 is inherited in an X-linked manner. Digenic inheritance has been reported. For autosomal recessive inheritance: at conception, each sib of an affected individual has a 25% chance of being affected, a 50% chance of being an asymptomatic carrier, and a 25% chance of being unaffected and not a carrier. Once the pathogenic variants have been identified in an affected family member, carrier testing for at-risk family members, prenatal testing for pregnancies at increased risk, and preimplantation genetic testing are possible. For pregnancies known to be at increased risk for JS, prenatal diagnosis by ultrasound examination with or without fetal MRI has been successful.