The hip joint is composed of five ligaments, where four are extracapsular and one intracapsular. The extracapsular ligaments are the iliofemoral, the ischiofemoral, the pubofemoral and the annular ligament (or zona orbicularis), the intrcapsular one is the ligament of the head of the femur. The iliofemoral ligament is also called Y ligament for is triangular shape or ligament of Bigelow, the name of the American surgeon who, among other things, described this ligament in details and invented the Bigelow maneuver for hip dislocation. [1] 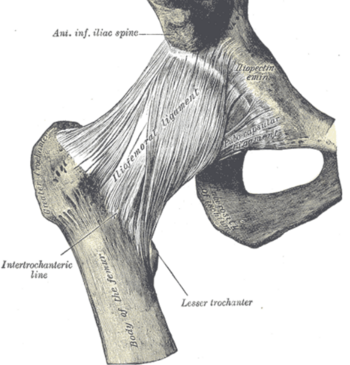 The iliofemoral ligament is considered the strongest ligament of the body as it can support a traction up to 350 kg. It has a relevant role in the hip joint stability. Generally, the hip's ligaments provide a slack region in mid flexion, where the muscles can freely move the joint in internal rotation, external rotation, abduction or adduction. Instead, the ligaments are taut in full flexion, extension, abduction and adduction, where the ball and socket shape of the hip joint cannot provide mechanical stability. [1]

The iliofemoral ligament limits extension, external rotation in full flexion and external and internal rotation in full extension of the hip. Moreover, it seems that it can assist the maintenance of static erect posture, mostly when the musculuar activity of the hip stabilizers is minimal. In fact, a histologic study [3] shows that the direction of collagen fibres in the iliofemoral ligament are parallel to the macroscopic direction of the tissue, and it suggets that the ligament plays a role in restricting the extension of the hip. Moreover, the study founded tha the ligament contribute to the stability of the hip joint in the standing position because of the low density of the crimp distribution in the longitudinal plane.

As previously said this ligament is important for the stability of the hip joint both in dynamic conditions (rotations in extension and flexion of the hip) and static condition, supporting the weight of the body. Because of its versatility, this ligament can be injuried for example for a partial or full tear from a direct blow to the hip or for overuse. Data about the frequency in which these conditions occur are lacking in literature. The tests used to detect an injury of the iliofemoral ligament:[1]

- HEER/Anterior apprehension: patient in supine at the end of the table with the affected leg hanging off and unaffected knee toward chest; passive hip extension and external rotation are applied. Sign: Hip joint pain or sense of anterior instability.

- AB-HEER: patient in side lying on unaffected hip; passive hip abduction to 30°, extension 10° and external rotation to end range while an anteriorly directed force applied to trochanter. Sign: Hip joint pain or sense of anterior instability.