Understanding the gluteal muscles' function in each plane of movement is imperative for accurately assessing the performance of this muscle group and its influence on patellofemoral pain. When the clinician can specifically identify the plane of movement in which the dysfunction occurs, as well as isolate the problematic structure, targeted rehabilitation exercises can be prescribed.

Gluteus medius acts as an abductor of the hip in the frontal plane. Poor hip abduction control in a single-stance, weight-bearing position leads to contralateral pelvis drop. In this scenario, the weight-bearing limb essentially falls into adduction, causing a functional valgus at the knee. This in turn creates greater load on the lateral patellofemoral joint (PFJ).[5] 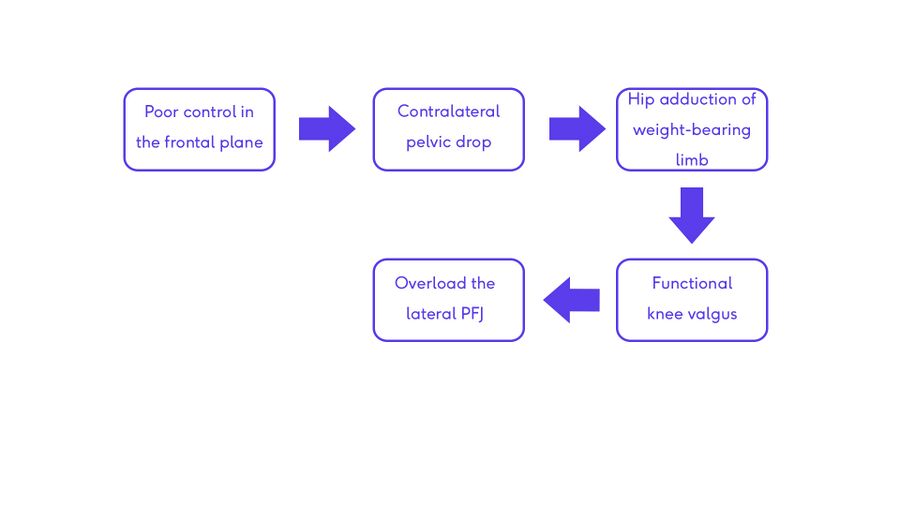 Gluteus medius is assessed in the frontal plane by performing hip abduction against resistance. During the test, it is recommended that resistance against hip abduction is maintained for 10 seconds. By sustaining the resistance applied to the muscle, the tonic performance of the muscle can be assessed rather than the phasic performance (phasic performance is tested in the first couple of seconds of holding a position against resistance). This is important because gluteus medius should act as a postural endurance muscle to stabilise the pelvis. To recap muscle fibre types; type 1 muscle fibres produce low power contractions over longer periods and are slow to fatigue (tonic muscle performance), type 2 muscle fibres have fast contractions and can fatigue more quickly (phasic muscle performance).

Gluteus medius can also be assessed in a weight-bearing position. The assessor looks at the ability of the client to control their pelvis as they perform a contralateral hip drop when standing on a step. This position allows for the concentric and eccentric assessment of the gluteus medius. This position is also effective for strengthening this muscle.[6]

Progressions of the bridge exercise to make it more challenging, include lifting the unaffected leg (i.e. perform a one-legged bridge) and adding a weight placed on the person's abdomen.

During gait, gluteus maximus works eccentrically to control rotation at the hip.[7] After heel strike, to around 24% into weight bearing, the femur and the tibia internally rotate. This is an expected movement. However, this internal rotation should only occur for a short period. Excessive internal rotation ultimately results in excessive loading of the lateral patellofemoral joint. Mirror gait retraining[8] can increase patient awareness of this movement and facilitate correction of faulty biomechanics.

Increased running speed is associated with increased movement in the frontal plane i.e. contralateral pelvis drop with corresponding hip adduction and resultant knee valgus. This increases the load on the lateral patellofemoral joint.[9] Bramah et al.[10] demonstrated that for every 1° increase in pelvic drop during running, there was an 80% increase in the likelihood of being classified as injured. The same study by Bramah et al.[10] showed that contralateral pelvis drop appeared to be the most strongly related variable to common running-related injuries, including patellofemoral pain.

When rehabilitating a patient with patellofemoral pain where lack of control in the frontal plane is a contributing factor, it is useful to consider running speed. The clinician can suggest reducing running speed to offload / reduce load on the patellofemoral joint as an alternative to stopping sport altogether. In team sports, a change of position on the court / field to a position where the patient will not be required to run as fast can be helpful.[9]