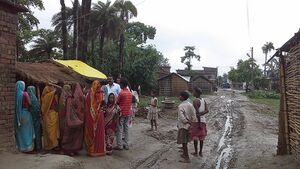 Epidemiology is the branch of medical science that investigates all the factors that determine the presence or absence of diseases and disorders. Epidemiological research helps us to understand how many people have a disease or disorder, if those numbers are changing, and how the disorder affects our society and our economy.[1] Epidemiology is often described as the basic science of public health.[2]Image 1: a disease outbreak investigation.

Epidemiology is the study of the distribution and determinants of health-related states or events in specified populations, and the application of this study to the control of health problems[3]

Incidence: The number of new cases of a disease or disorder in a population over a period of time. An example of incidence: Auckland in New Zealand, often has epidemics of meningococcal disease, with annual incidences of up to 16.9/ 100,000 people.[4]

Prevalence: The number of existing cases of a disease in a population at a given time. An example of prevalence: A recent Scottish study showed that the prevalence of obesity in a group of children aged from 3 to 4 years was 12.8% at the time.[5]

Cost of illness: Many reports use expenditures on medical care (i.e., actual money spent) as the cost of illness. Ideally, the cost of illness would also take into account factors that are more difficult to measure, such as work-related costs, educational costs, the cost of support services required by the medical condition, and the amount individuals would pay to avoid health risks.

The disability-adjusted life year (DALY) is a measure of overall disease burden. It was developed in the 1990s as a way of comparing the overall health and life expectancy of different countries.[6] 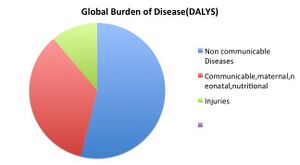 Determinants - the causes and other factors that influence the occurrence of disease and other health-related events.

Specified populations - the epidemiologist is concerned about the collective health of the people in a community or population[2]. A key feature of epidemiology is the measurement of disease outcomes in relation to a population at risk.[8] Implicit in any epidemiological investigation is the notion of a target population about which conclusions are to be drawn and are often observations that can only be made on a study sample, which is selected in some way from the target population.[8]

Application - Epidemiology is not just “the study of” health in a population; it also involves applying the knowledge gained by the studies to community-based practice.

Epidemiology is the study (scientific, systematic, data-driven) of the distribution (frequency, pattern) and determinants (causes, risk factors) of health-related states and events (not just diseases) in specified populations (patient is community, individuals viewed collectively), and the application of (since epidemiology is a discipline within public health) this study to the control of health problems.[2]

Incidence is often confused with prevalence. The easy way to remember the difference is that prevalence is the proportion of cases in the population at a given time rather than rate of occurrence of new cases. Thus, incidence conveys information about the risk of contracting the disease, whereas prevalence indicates how widespread the disease is.